Pensions: For CEOs Only

11 Apr Pensions: For CEOs Only

Grandma skips meals. Her house is always cold. She barely skimps by, subsisting on just Social Security because of a bunch of pension-killing CEOs and self-dealing financial “advisers.”

The U.S. Labor Department offered some rules last week to help grandma with half the reason she’s got no pension or 401(k) retirement account to help pay those heating bills. The regulations will require financial advisers to put their clients’ interests first, instead of their own.

That’s good, but working people wouldn’t be messing with flimflam financial advisers if corporations hadn’t squirmed out of providing traditional pensions and stuffed all of the money instead into the pockets of CEOs. Over the past three decades, corporations virtually eliminated secure pensions, forced workers into risky, self-pay plans and handed hundreds of millions in tax-free retirement benefits to the top dogs. Pensions aren’t dead; they’re just exclusive now. 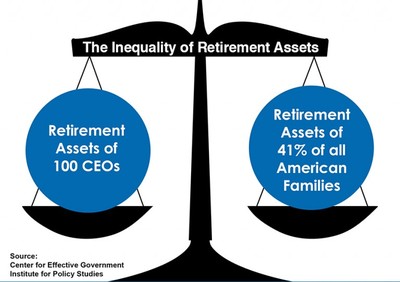 The McKesson Corporation provides a perfect example of this. McKesson froze its employee pension in 1996, and barred workers who were hired after that from participating.  By contrast, several years later, McKesson established an executive retirement account for CEO John Hammergren. It put $114 million in there for him, which when added to Hammergren’s other McKesson pension benefits, gives him a total of $145,513,853.

Since Hammergren became McKesson president and CEO in 2001, the company has quadrupled revenues and provided shareholders with more than a 17 percent compounded annual return. Nice work, Hammergren – and 76,000 other dedicated McKesson employees!

McKesson does provide its workers with the opportunity to put their own money in a 401(k) plan. Until the new Labor Department rules take effect next year, they can hope a financial adviser won’t cheat them on investment of that money.

The secure pension that grandma and grandpa once received was called a defined benefit pension. Each hour a worker labored, he or she earned a contribution by the employer into a fund that would pay this benefit on retirement. It was deferred compensation.

Defined benefit pensions, safer conditions, and, of course, better pay, were among the many workplace improvements hard won by 5,000 strikes involving 4.6 million American union workers in the years after World War II. Before the war, in 1940, only 15 percent of private sector workers had defined benefit pensions. By 1960, 41 percent did.

That number rose to 46 percent in 1980. But then progress stopped. In 1981, Republican President Ronald Reagan broke the air traffic controllers union by replacing striking workers. That sent a signal for the first time since Democrat FDR paved the way for unionization in 1935 that the government would support corporations that destroyed unions, corporations that crushed the ability of working people to collectively bargain to improve their lives.

Corporations responded by doing everything they felt they could get away with to obliterate unions of working people. In 1980, about 23 percent of private sector workers were union members. Today, it’s 6.7 percent.

Chart by Center for Effective Government and Institute for Policy Studies in its report, “A Tale of Two Retirements”

Instead of secure defined benefit pensions, corporations stuck workers with those 401(k) plans instead. “You’ll love ‘em,” the corporate bosses said, “You can take ‘em with you when we push you out the door.”

Those plans, and Individual Retirement Accounts, IRAs, are the ones where workers get cheated, where they think the financial adviser is helping them because all the signs in the office windows proclaim baloney like, “Clients First!” The “adviser” never mentions to the worker that the mutual fund he’s recommending not only is low yield but also pays the adviser huge commissions for every sucker he signs up.

The Obama administration estimated that cheating, self-dealing and conflicts-of-interest cost workers $17 billion a year. That should be $17 billion more in workers’ retirement accounts. Every year.

The amount a worker can put in his 401(k) is limited. It’s $24,000 a year for workers older than 50. And to their credit, some corporations match worker contributions.

By contrast, there’s no limit on what CEOs can sock away tax free in their super special retirement accounts.

That limitlessness is clear in this figure: The 100 biggest CEO retirement funds add up to $4.9 billion.

That $4.9 billion is equal to the entire retirement savings of 41 percent of American families, 50 million families, 116 million people.

And if that’s not bad enough, there is also fact that the massive pile of CEO pension money is tax-free. That means workers make up the difference – workers must pay more taxes because CEOs pay less.

Here is just one example of the cost to taxpayers for a CEO. Glenn Renwick, CEO of Progressive Insurance, put $26.2 million in his tax-deferred account in 2014. That saved him $10 million in federal taxes. That $10 million came instead from workers who reliably paid up every week with IRS deductions directly from their paychecks. Of course, that left them with less to invest in 401(k) accounts.

Progressive’s Flo can change the price with her Name Your Price Tool, just like Obama’s Labor Department changed the pension adviser rules. And the U.S. government can change the grotesquely unfair rules under which CEOs like Progressive’s Renwick get special pension tax treatment.

The government could also strengthen the ability of workers to organize and, as they did in the 1950s, stand together and collectively bargain for better pay and pensions. Then, grandma could retire with dignity and heat her house.