For years, Republicans have kept a gambit going where they gin up hate for political gain.

They condemn marriage equality. They throw a hissy fit about what bathroom transgender people use. They try every dirty trick in the book to prevent black people from voting. They blame undocumented immigrants for crime and unemployment. They actually suggest armed patrols of American Muslim communities.

And then something unexpected happened. Corporations started getting squeamish about all that hate. Big, burly, traditionally GOP-donating corporations! Corporations warned some governors that they’d withdraw investment if the states didn’t reverse gay-bashing legislation. And now corporations are telling Republicans they’re not so sure they’ll pony up for the 2016 GOP convention because they don’t want to be associated with the Republican candidates’ hate mongering. Hate may have brought the GOP a load of publicity but it lost the party a bushel of bucks. 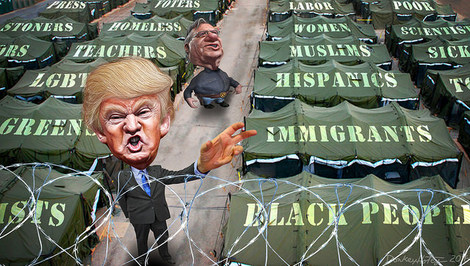 Republican front-runner Donald Trump is the all-star for hate spewing. He launched his campaign by slandering Hispanic people, saying of immigrants, “They’re sending people that have lots of problems, and they’re bringing those problems. They’re bringing drugs. They’re bringing crime. They’re rapists, and some, I assume, are good people.”

Both Trump and rival Ted Cruz promised bigoted followers they would round up 11 million undocumented immigrants and deport them, forcibly separating American-born children from their Mexican national parents, who frequently labor long hours at below-minimum-wage jobs, pay taxes and scrupulously steer clear of any kind of trouble for fear of being deported.

Trump scored a hateful twofer when he insulted a rival who was the only woman in the GOP field, former Hewlett-Packard CEO Carly Fiorina. Here’s what he said: “Look at that face! Would anyone vote for that? Can you imagine that, the face of our next president?”

And then, if that wasn’t offensive enough to women, he got himself into a long-running feud with Fox News host Megyn Kellyafter she asked him about his descriptions of women as “pigs, dogs, slobs and disgusting animals.” Trump ultimately responded by accusing Kelly of having blood “coming out of her eyes – blood coming out of her wherever,” as if she were hormonal, not asking him legitimate questions based on concern about his temperament to be president.

Trump and Cruz are neck-and-neck for fostering unfounded suspicion of American Muslims. After the bombings in Paris,Trump said he’d ban all Muslims from entering the United States, and earlier he’d called for surveillance of mosques and establishing a database of all Muslims in the United States. In the wake of the Brussels attack, Cruz called for armed patrols of American Muslim communities.

Even supposedly mild-mannered John Kasich is not immune, recently criticizing the black community for failing to solve its own infant mortality problem like, he claimed, white people did. Here’s what he said: “And the [black] community itself is going to have to have a better partnership with all of us to begin to solve that problem of infant mortality in the minority community, because we’re making gains in the majority community.”

But, of course, nobody beats Trump for offending African Americans. This is the guy who declined three opportunities in a row to renounce an endorsement by white nationalist and former KKK leader David Duke.

Now, however, the consequences of such hate are visible in greenbacks. A study by Visit Indy, Indianapolis’ convention and tourism organization, found that Indiana lost at least $60 million after lawmakers passed the Religious Freedom Restoration Actlast year giving businesses the right to discriminate against LGBT people on religious grounds. That research showing the hateful law cost the state real money may have helped dissuade lawmakers from passing a more stringent version of the legislation this year.

Georgia just got the same financial punch in the gut for an attempt at legalizing LGBT discrimination. The legislature passed a law allowing faith-based groups to deny services to gay people, the way many southern states adopted laws a century ago permitting businesses to turn away black people.

Corporations gave Georgia’s discriminatory law the same reception they did Indiana’s. Salesforce, Disney, Unilever, Intel and Georgia Prospers, representing 480 companies, including Coca-Cola, Delta, Home Depot, UPS, and Marriott all denounced the legislation. Some threatened to reduce investment in the state, and media companies threatened to stop filming there.

Now, some corporations aren’t so sure they want to be associated with Trump-Cruz-Kasich hate-show at the Republican National Convention.

Apple, Google and Walmart are among the firms assessing their plans for sponsorship at the $64 million convention. Trump has said there will be riots if he is not chosen as the party’s nominee, and Cleveland has sought bids for 2,000 sets of riot gear. The Walmart smiley face filmed as a backdrop for riot police wielding batons to bloodied protesters’ heads probably would not work well with the “live better” part of Walmart’s new business slogan.

Coca-Cola, one of the companies that gave Georgia a hard time for attempting to legalize discrimination against LGBT people, slashed the amount it donated to the GOP convention this year. It was $660,000 last time. This year it’s $75,000.

Coke has declined to explain the cut. But there’s no doubt that an organization called Color of Change made an impact. Color of Change sponsored a petition drive demanding that Coke and other companies renounce the GOP event because sponsoring it would be endorsing Trump’s “hateful and racist rhetoric.”