Free traders in Congress formally proposed last week that lawmakers relax, put their feet up and neglect the rigor of legislative review for the Trans-Pacific Partnership (TPP) trade scheme.

The TPP is a secret deal among 12 Pacific Rim nations that was covertly negotiated by unelected officials and corporate bosses. It’s so clandestine that lawmakers elected to represent the American people were refused access to the deliberations. It wouldexpand secret trade tribunals that corporations use to sue governments over democratically established laws and win compensation from taxpayers.

The Congressional free traders want to Fast Track authorization of the TPP. Fast Track enables Congress to abdicate its constitutionally mandated duty to regulate international trade. Instead of scrutinizing, amending and improving proposed trade deals, lawmakers use Fast Track to gloss over the specifics and simply vote yea or nay on the entire package as presented. With elected officials excluded from the talks, details of the treaty deliberately shrouded in secrecy and free traders demanding lawmakers ignore the deal’s effects on constituents, this process condemns democracy. 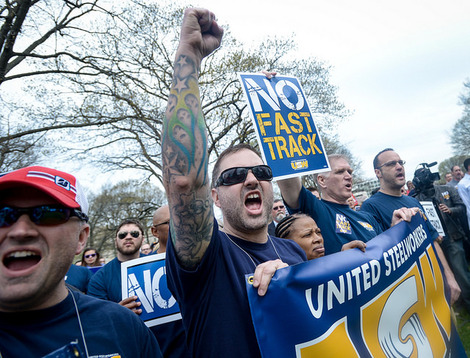 As usual, the free traders say, don’t worry, the TPP is gonna be great, just great! Trust us, they say.

For opponents of the deal – unions, environmentalists, human rights groups and Congressional progressives – there’s no trusting free traders. That’s because they’ve proven to be nothing but flimflam men. Deals they’ve peddled previously, like NAFTA, CAFTA and KORUS, have not, in fact, been great. They’ve dramatically increased the nation’s trade deficit, prompted corporations to ship manufacturing offshore, cost millions of American workers their jobs and suppressed wages.

President Barack Obama, who is pushing the TPP, admits opponents are right to be wary. During a meeting recently with small business executives, he conceded,  “Trade deals have not always been good for American manufacturing …There have been times where because the trade deal was one way, American workers didn’t benefit and somebody else did.”

Even so, he too sought trust, adding: “Well, we intend to change that.”

There’s no trust when 32 percent of American steel mill production is idled and more than 6,000 steelworkers are laid off or warned of impending furloughs because of unchecked imports of illegally subsidized steel from China.

The AFL-CIO, the Alliance for American Manufacturing, the United Steelworkers and others have pleaded with the administration for years to provide relief from China’s price-distorting currency manipulation. The administration responded with inaction.

There’s no trust when free traders promised workers that NAFTA would generate hundreds of thousands of jobs, but as it turned out, those jobs were poverty-wage positions in Mexico created when American manufacturers took advantage of NAFTA provisions to close American factories and move them across the border.

Public Citizen’s Global Trade Watch examined the effect of NAFTA and wrote in areport issued in February of 2014, “Twenty years later, the grand projections and promises made by NAFTA’s proponents remain unfulfilled. Many outcomes are exactly the opposite of what was promised.”

The most devastating upside-down outcome is jobs. The Global Trade Watch report notes that more than 845,000 U.S. workers qualified for Trade Adjustment Assistance after having lost their jobs as a result of imports from Canada or Mexico or relocation of U.S. factories there. It’s extremely difficult to qualify for Trade Adjustment Assistance, so this number probably understates the total job losses significantly.

In addition, when workers who lost jobs landed new ones, they got paid less, with the average reduction greater than 20 percent.

KORUS is the same sad story. Free traders pledged three years ago that the deal with South Korea would produce tons more exports that would, of course, create lots of new American jobs. Instead, the U.S. goods trade deficit with Korea grew 84 percent, excluding the value of foreign-made goods that pass unaltered through the United States on their way to Korea.

Calculating with the trade-to-jobs formula that free traders used when they were promoting KORUS, the U.S. trade deficit with Korea translates into the loss of nearly 85,000 U.S. jobs – in just three years.

This does not engender trust.

Still, free traders now are huckstering the TPP with promises of job gains. They’re not fooling everybody, though, with their claim that it will create 650,000 jobs. In January, the Washington Post fact checker gave this promise its highest liar-liar-pants-on-fire rating of four Pinocchios.

Using the free traders’ own method of calculating, the Post determined TPP would create no new jobs. That would be a fabulous result after the track record of these trade pacts causing massive job losses. Fantastical probably is a better descriptor, though, for a no-job-loss outcome.

But don’t worry, the free traders say, TPP will include Trade Adjustment Assistance to help workers thrown out of jobs by offshored factories and employers bankrupted as a result of dirt-cheap imports produced by exploited workers in countries without pollution controls.  Trust us, the free traders say, displaced workers can use tax dollars to train for brand new jobs that pay 20 percent less!

Based on broken promises, Americans don’t like free trade schemes. So free traders in Congress, like Republican Sen. Orrin Hatch, are trying to fast track Fast Track before the public notices. The New York Times explained this: “Both the Finance and Ways and Means committees will formally draft the legislation next week in hopes of getting it to final votes before a wave of opposition can sweep it away.” The Times quotes Hatch saying about the rush to legislate: “If we don’t act now, we will lose our opportunity.”

Earlier former U.S. Trade Representative Ron Kirk explained why the administration refused to disclose the contents of the TPP, a task that Wikileaks took on instead. Kirk told Reuters that telling the public what the deal contains would make passage impossible.

Concealing potentially job-killing trade schemes from the American public thwarts democracy. Rushing unpopular legislation through Congress before American citizens have an opportunity to review it and tell their elected representatives how they feel about it obstructs democracy.

No trade treaty, no matter how great free traders cross-their-hearts-and-hope-to-die it will be, is worth damning Americans’ cherished democracy.