This is no plea for pity for corporate kingpins like Walmart and McDonald’s inundated by workers’ demands for living wages.

Raises would, of course, cost these billion-dollar corporations something. More costly, though, is the price paid by minimum-wage workers who have not received a raise in six years.  Even more dear is what these workers have paid for their campaign to get raises. Managers have harassed, threatened and fired them.

Despite all that, low-wage workers will return to picket lines and demonstrations Wednesday in a National Day of Action in the fight for $15 an hour. The date is 4 – 15. These are workers who live paycheck to paycheck, barely able to pay their bills, and certainly unable to cope with an emergency. They know the risk they’re taking by participating in strikes for pay hikes. They’ve seen bosses punish co-workers for demonstrating for raises. To lose a job, even one that pays poverty wages, during a time of high unemployment is terrifying. Still, thousands will participate Wednesday. That is valor. 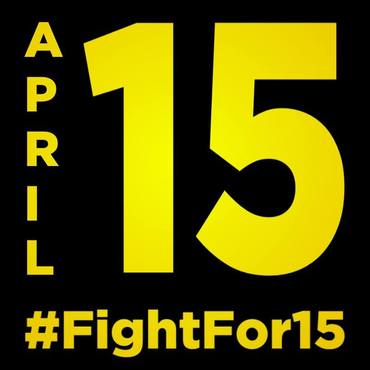 Kip Hedges exhibited that courage. He’s a 61-year-old with 26 years of service as a baggage handler for Delta at the Minneapolis-St. Paul Airport. He wanted better wages for young workers and a union. He said so in a video, noting that “probably close to half make under $15 an hour.”

Delta fired him. The airline said he’d disparaged the company. Apparently Delta believes it has been disparaged if the flying public learns the truth about the way Delta treats workers.

Clearly, Delta planned to shut Hedges up and intimidate other workers. The message to his co-workers was clear: “You wanna talk about the paltry wages you get? Well, let’s talk about this pink slip.”

But when Delta messed with Hedges, it messed up big time. The firing failed to silence him. He continued to protest low wages. His co-workers rallied round him. The media covered his firing and his appeal. He looked like a low-wage worker hero. Delta looked like a vindictive heel.

Unlike Hedges, Shanna Tippen was no activist before she got fired from her minimum-wage job in Pine Bluff, Ark. She was just trying to get by, and falling short by about $200 a month. Her boss at the Days Inn where she worked as a night shift jack-of-all-trades asked her to talk to a Washington Post reporter who had dropped by the hotel to discuss the state’s newly instituted 25-cent increase to the federal minimum wage of $7.25.

Tippen told the reporter, Chico Harlan, that she hoped the little bit of extra money would help her pay for her grandson’s diapers.

After the Post published the story, the manager of the Days Inn, Herry Patel, telephoned Harlan to complain about being quoted in it. Then he fired Tippen. She recounted it to Harlan:

“He said I was stupid and dumb for talking to [The Post].”  Even though, of course, Patel had told Tippen to talk to the reporter. Tippen continued: “He cussed me and asked me why you wrote the article. I said, ‘Because he’s a reporter; that’s what he does.’”

Patel told Harlan that Arkansas voters, who approved the pay increase in a referendum by 66 percent, should not have done it. “Everybody wants free money in Pine Bluff,” Harlan quoted him as saying.

Patel apparently did not understand that Tippen performed work that kept the hotel running every night, which means she earned the money. The truth is that Patel, like so many other employers, believes that employees should work for free.

The Post and other papers wrote about Tippen’s firing, making her an icon for ill-treated, low-wage workers and Patel the personification of miserly bosses.

Worker-exploiting employers like McDonald’s, Chipotle and Walmart have shown themselves to be craven in the face of courageous workers’ wage protests as well.

Over the past few months, the National Labor Relations Board (NLRB) has filed charges against McDonald’s and Walmart alleging they violated workers’ rights, including threatening retribution against those who participated in strikes.

In December, the NLRB in California ruled that Walmart illegally punished workers for striking and seeking to unionize. The judge determined that Walmart managers illegally intimidated workers by, for example, telling one, who had tied a rope around his waist to pull a heavy load, “If it was up to me, I would put that rope around your neck.”

In the Chipotle case, the NLRB ruled that a manager in St. Louis illegally fired worker Patrick Leeper for participating in Fight for $15 demonstrations and for talking about wages at work. After the decision, a company spokesperson told the news website Think Progress: “Generally speaking, it is always a top priority for us to remain compliant with all local and federal labor laws.”

“Generally,” Chipotle tries. Generally. Not in this particular case involving low-wage workers demonstrating for better pay. But, you know, generally Chipotle tries to obey the law.

In the original Washington Post story about the tiny increase in the minimum wage in Arkansas, Dominic Flis, whose company owns 18 Burger Kings in central Arkansas, said raising the minimum wage pushes up pay for other workers too. Here’s what he said:

“If somebody was already making $7.50, and minimum wage goes to $7.50, they’ll have some expectation of a raise as well,” Flis said. “And I have to maintain my workforce.”

The Brookings Institute calls this the ripple effect. The pay increase at the bottom ripples all the way up the pay scale.

Hedges, the fired Delta worker, put it another way: “a lot of the better paid workers also understand that the bottom has to be raised otherwise the top is going to fall as well.”

If for no other reason than self-interest, join the gutsy minimum-wage workers at aFight for $15 event Wednesday.