In recounting his “deal-making” experience, Trump says the important thing is that he made a buck, that he came out rich. He ignores the father of five who lost his business when a Trump casino didn’t pay for cabinets. He discounts the minimum wage workers that a Trump resort cheated out of hundreds of dollars of overtime.

And that, Trump says, is how he’d run the country. Trump said that as president he’d treat the nation’s creditors the way he did the creditors in his repeated business bankruptcies, forcing them to accept pennies on the dollar owed. Somebody loses. But it’s never billionaire Trump. When Americans elect a president, they want a leader who will look out for the little guy, not take advantage of him. Exploiting the little guy – and everybody else – to make a buck for himself is Donald Trump’s M.O. That’s not presidential. 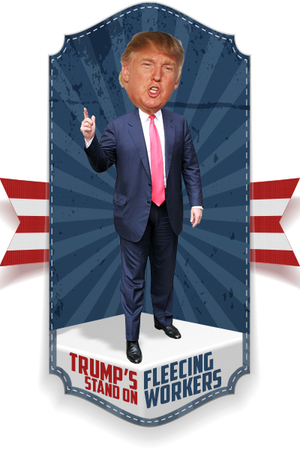 The terrible tale of Trump casinos in Atlantic City illustrates his relationship with money, workers and small business. His casino companies went to bankruptcy court four times. Tradesmen, small businesses and creditors weren’t paid. But Trump made out like a bandit. And he’s mighty proud of it.

“Atlantic City fueled a lot of growth for me,” he boasts. “The money I took out of there was incredible.”

He told the New York Times repeatedly that it wasn’t the bankruptcies that mattered; what was really important was that Donald Trump made a lot of money.

What he said is true: he prospered on the backs of botched casino projects. Even as his three Atlantic City casinos failed, a New York Times investigation found Trump shifted personal debts to the casino companies and collected millions of dollars in salary, bonuses and other payments.

At one point in 1990, as the Trump empire in Atlantic City neared collapse and Trump was failing to pay his debts to small businesses, Trump’s lenders made him sell his airline and his yacht. And they put him on a budget for personal and household expenses. It was $450,000. A month.

Still, Trump repeats: “The money I took out of there was incredible.” The stock and bond holders in his bankrupt casino corporations can’t make the same brag. They lost $1.5 billion.

The small businessmen and women who Trump fleeced after they completed their work in his casinos aren’t bragging either.

Steven P. Perskie, who was New Jersey’s casino regulator in the early 1990s during Trump’s time there, told the New York Times, of Trump, “He put a number of local contractors and suppliers out of business when he didn’t pay them. So when he left Atlantic City, it wasn’t, ‘Sorry to see you go,’ It was, ‘How fast can you get the hell out of here?’”

Beth Rosser’s father was among those unpaid contractors. His company, Triad Building Supplies, nearly collapsed when the Trump Taj Mahal went into bankruptcy. He waited three years for what Trump owed him and then got only 30 cents on the dollar.

“Trump crawled his way to the top on the back of little guys, one of them being my father,” Rosser told the New York Times. “He had no regard for the thousands of men and women who worked on these projects,” she said.

Her father’s company was one of 253 subcontractors that performed work like installing walls, plumbing and lighting at the Taj Mahal, mom and pop shops that Trump failed to pay $69.5 million, according to an audit in casino commission records.

The vice president of another one of those companies, Marty Rosenberg of Atlantic Plate Glass, told USA Today that Trump was offering the small businessmen less than a third of what he owed them. Trump’s breach of contract and the long wait for any kind of payment cost some of these tradesmen their companies, everything they’d built up in their lives.

But not Donald Trump.  “The money I took out of there was incredible,” he bragged to the New York Times.

It wasn’t just the casinos. Pillage is Trump’s business model. Trump has been embroiled in hundreds of lawsuits for refusal to pay contractors and workers at his projects across the country.

Trump’s Doral golf resort in Florida, for example, denied payment to two painting contractors. It finally settled one claim. But it owes Juan Carlos Enriquez, owner of The Paint Spot, $30,000. Enriquez sued and won. When Trump still didn’t pay, the judge ordered foreclosure of the resort.

Trump’s attorneys, of course, filed a motion to delay the sale. So Enriquez still hasn’t been paid. That’s what it’s like when a small businessman challenges billionaire Trump.

Occasionally, the little guys defeat the Goliath, though. Forty-eight servers at Trump’s Miami golf resort won a suit against him last month for failing to pay overtime. The settlements averaged $800 for each worker.

Trump has no qualms about cheating professionals either. A real estate broker, Rana Williams, sued him in 2013 alleging that he shorted her $735,212 in commissions. She told USA Today the cheat was “based on nothing more than whimsy.” They settled in 2015. In her deposition, Williams, who had worked with Trump over two decades, said it wasn’t the first time he denied her or others their contracted rate.

Americans expect their president to protect their jobs, their savings, their futures. Donald Trump’s business track record shows he has no experience with all that. And no interest in it. He’s always been in business to make even more billions for himself, no matter who got hurt. It’s the same with the presidency. He’s not in the race to make America great. He’s in it to make Donald Trump feel great.