The dark and treacherous skies Donald Trump invoked at the Republican National Convention last week have lifted as Democrats begin their meeting in Philly today with a healthy dose of optimism.

The Hillary Clinton team sees America differently. They recognize problems like stagnant wages, unfair trade closing American factories, insufficient support for working mothers, terrorism, and conflict between cops and communities of color. And they have concrete plans to deal with those. 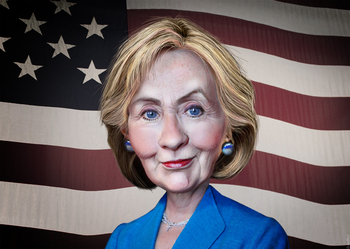 The Clinton team has a unifying vision calling for Americans to work together to solve problems and build a better future for everyone. Hillary Clinton believes a good president inspires the best in Americans and motivates them to display their cherished qualities of community, fairness, and equal opportunity.

And the Clinton team believes Americans should have the choice about whether to join her team. That is why her slogan is: “I am with her.” A person who decides to support her can announce it by wearing that slogan.

The Trump clan is different. He insists, “I am with you.” That’s a shadow cast over voters whether they want it or not.

And it’s a dark, dark shadow. His convention was designed to frighten. It was stoked by hate, rancor, loathing, and condemnation. His own hour-long, yell-fest was filled with horror, venom, gloom and egotism. It is not morning in Trump’s America. It is the eve of absolute destruction. 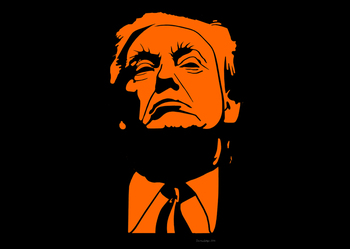 Be afraid, he said, be very, very afraid. The sky is falling. The world is collapsing. And only Donald Trump, an egomaniacal billionaire reality TV star, can save the country.

Be afraid of terrorists apparently everywhere in our midst, he warned. Then he demonized marginalized groups: refugees desperate for safety and a better life in America, unarmed black people seeking more cops willing to serve and protect them too, undocumented immigrants who pick America’s crops and make its hotel beds, and who, statistics show, have a lower crime rate, including violent crime, than native born Americans.

He said the country is threatened by crumbling infrastructure – without mentioning that GOP majorities in Congress have repeatedly refused money to repair it. And he slammed the economy, though it is rising steadily from the depths of the Bush-era Great Recession.

This occurred at a GOP convention with the lowest number of African-American delegates in a century, about 1 percent. On the first night of the meeting, U.S. Rep. Steve King, a Republican from Iowa who keeps a confederate flag on his desk, went on MSNBCand defended the lack of diversity asking, “where did any other subgroup of people contribute more to civilization” than white people?

It occurred at a GOP convention where the platform committee refused a gay delegate’s request for support for LGBT people’s right not to be murdered by terrorists, as in Orlando. And though much was made of openly gay Silicon Valley investor Peter Thiel speaking at the conclave, the billionaire threw transgender people under the bus during his talk by insisting no one cares about GOP laws discriminating against them by restricting their use of restrooms.

It also occurred at a GOP convention where the party gave a speaking slot to an actor who tweeted a photo of Hillary Clintonwith a vulgar sexual word in the background and a former candidate for the GOP presidential nomination who linked her to the devil because she wrote a thesis in college – 50 years ago – about an author who referred to the devil in an introduction to one of his books.

It also occurred at a convention where Trump’s hatefulness during the primary came back to him. Trump mocked opponent Carly Fiorina’s face; he called Marco Rubio, “Little Marco,” Jeb Bush, “Low Energy Jeb,” and most memorably, Ted Cruz, “Lyin’ Ted.” Trump also ridiculed Ted’s wife in a tweet and suggested Cruz’s father was involved in the JFK assassination.

In return, Cruz used his time on the convention stage to make what amounted to an acceptance speech instead of a Trump endorsement. This provoked a situation so volatile that Cruz’ wife,Heidi, had to be rushed out of the stadium by guards for her own safety as delegates aggressively heckled her.

It was a dark and nasty convention, with an ominous and overcast finale. Trump declared in his valedictory that he, and only he, a politically inexperienced reality TV star who gained fame for firing people, could solve everything. “I alone,” he said, “can fix it.”

He promised to be an iron-fisted, law-and-order, one-man savior, a superman who has utterly no qualifications for the job.Everything is completely horrible, inside the country and out, he asserted. He is a billionaire who lives in a golden tower and who has never in his life had to worry about a lay off or a mortgage bill, who, in fact, repeatedly stiffed working guys and small contractors during his bankruptcies, but, he insisted, he alone would solve everything for the middle class.

When asked what he hoped voters would take away from his convention, Trump said, “The fact that I’m very well liked.”  He did not hope they would take away a specific Trump plan for on-shoring the manufacturing of Trump signature clothing now made with foreign labor overseas, or, more importantly, bringing back thousands of factories and millions of jobs from low-wage countries like China.

He didn’t hope they’d take away a specific Trump policy for dealing with ISIS or conflict between cops and communities of color. He knew they would not take away an overriding Trump philosophy for governing. Because he didn’t offer any of that.

No. Donny just wants to be liked. And to do that, he told Americans they should be terrified and look only to a reality TV star as the slick solution, a guy who insisted, “I am with you,” whether Americans want a name-calling bully shadowing them or not.