Reaganomics, the plot to appease the rich and condemn the rest, got its comeuppance last week in President Obama’s State of the Union speech.

The president asked: “Will we accept an economy where only a few of us do spectacularly well?”

That’s the trickle down economy he’s talking about. And when he said, “spectacularly well,” that understated the great fortune of the very few.  Oxfam, the international federation working to end poverty, reported just before the speech that if nothing changes over the next two years, the top 1 percent will hoard more wealth than that held by the entire remaining 99 percent of humans on earth.

President Obama made it clear he has no intention of accepting such economic damnation for the vast majority of Americans. He proposed an alternative to Ronnie’s scheme. President Obama called it middle class economics. Though its intent is to create opportunity, prosperity and security for the working poor and middle class, it’ll be a hard sell. That’s because Americans have been force fed that voodoo, greed-is-good, grovel-before-the-rich financial philosophy for so very long. 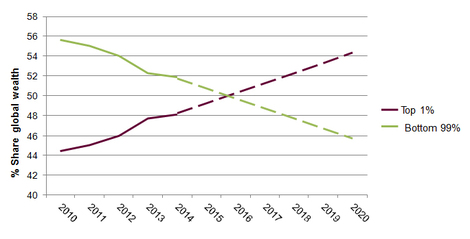 Middle class economics turns trickle down on its head. Instead of focusing on the whims of the wealthy, middle class economics meets the needs of the majority. It raises taxes on the rich, often by eliminating their lobbyist-purchased loopholes. And it uses that revenue to pay for programs that would broaden opportunity for the 99 percent, including two free years of community college, assistance for child care and help with retirement savings.

This is no killer tax increase on the wealthy. It’s hardly the 90 percent marginal income tax rate charged to the nation’s richest at times in the 1940s and 1950s. This would be an increase from 23.8 percent to 28 percent on capital gains and dividends, the same rate Reagan charged, so it could hardly be gawd-awful.

And, by the way, they can afford it. Oxfam found that for the past five years, the top 1 percent has been grabbing a greater and greater portion of global wealth, while the bottom 99 percent has been stuck with a smaller and smaller share. In fact, the world’s richest 80 people now have stashed away the same wealth as the entire accumulated assets of half of the world’s population.

The system’s dammed when 80 fat cats have as much as everything scrimped together by 3.5 billion people.

The tale that trickle-downers like to tell about billionaires is that they are rags-to-riches success superheroes. Trickle-downers assert that any American can pull himself up by his bootstraps and through dint of hard work become a billionaire.

Oxfam’s research suggests otherwise. It found that more than a third – 34 percent – of the 1,645 billionaires on the Forbes richest list started out wealthy, having inherited some or all of their money.  It’s just so much easier to tug on those bootstraps when born with a silver shoehorn in the mouth. Think of those Walmart heirs, for example.

Middle class economics proposes a partial solution for that: ending the trust fund tax loophole. For those with incomes above $2 million who bequeath to their children stock that has increased in value, taxes on those capital gains would no longer be waived. Seems fair. Taxes shouldn’t be forgiven just because Richie Rich is inheriting.

Meanwhile, the tax rate on those capital gains would increase because, frankly, there’s no reason that a lower rate should be levied on money accrued from sitting on stocks than on wages earned from sweat of the brow.

The revenue raised would be used to pay for programs assisting the working poor and middle class, like tripling the tax credit for young children to $3,000, creating a $500 credit for families with two working spouses and broadening eligibility for the earned income tax credit.

This plan levels the playing field ever so slightly for the children of tenant farmers and Walmart workers because while those kids will inherit fond memories, there won’t be any stock-stuffed trust funds for them.

Raising taxes on the rich and increasing opportunity for the rest conforms with Oxfam’s recommendations to decrease debilitating global income inequality.  Oxfam suggests “shifting the tax burden away from labor and consumption and towards wealth, capital and income from these assets.”

Its report, “Wealth: Having It All and Wanting More,” makes clear the reason for its recommendation that the fabulously wealthy pay more. It notes that the wealth gap has widened so quickly over the past few years that it now takes far fewer billionaires to equal the wealth of the entire bottom half of the world’s population.

Most people would say that’s just not right. But not Republican Speaker of the House John Boehner. He says he has no intention of raising taxes on billionaires to help pay for opportunity for the working poor and middle class. He says middle class economics is all wrong – the wrong policies, the wrong priorities.

In fact, on of the first day of this legislative session, the House he presides over passed a bill that would cut Social Security disability benefits by 20 percent in 2016 for 11 million people, including veterans disabled in Iraq and Afghanistan.

It would be against his economic religion, that being Trickle-Downism, to lift the cap on Social Security so that the rich pay on every penny they make, just like the working poor and middle class do. If the wealthy paid Social Security taxes on their earnings above the $120,000 cap, no one would be talking about cutting Social Security payments to disabled veterans.

Boehner and his followers claim the American people are on his side. He’s just wrong. The polling numbers on President Obama’s State of the Union Speech outlining middle class economics illustrate that.

Americans believe trickle down economics have condemned them to flat wages and foreclosed futures. They want a new morning in America where middle class economics places them, the vast majority, first.