Question Before the Court: Can Corporations Betray Retirees?

17 Nov Question Before the Court: Can Corporations Betray Retirees?

Heaven ended in 2007 for Tackett and other retired Point Pleasant workers. That’s when the corporation that now owns the plant betrayed them by refusing to continue paying the full cost of retiree health benefits. These days, it’s almost hell for retirees. For seven years they’ve lived under a dark shadow, as if Point Pleasant’s most infamous denizen, the monster Mothman, immortalized in the book and movie The Mothman Prophesies, had returned.

The United Steelworkers (USW) union told the U.S. Supreme Court last week that these workers had labored a lifetime to earn retiree health benefits. The court should forbid the company from rescinding earned benefits, the USW argued. The corporation, M&G Polymers, asked the court to validate its reneging on its pledge to workers because, it contended, the collective bargaining agreement is insufficiently specific. M&G insisted that vagueness gives it carte blanche to shift costs to workers. 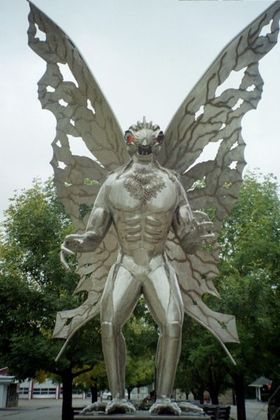 “I think a lot of corporations these days are doing the same thing,” Tackett said.  “I am just hoping the Supreme Court will prohibit it,” added Tackett, who is one of three named plaintiffs representing the class of 492 Point Pleasant plant retirees and spouses. Workers at the West Virginia plant are members of the USW.

Tackett talked about the appeal as he prepared to go to a funeral for a friend from his days in the plant. That man will never know the ultimate outcome of the case that the retirees won at both the trial and appeals levels. The man’s widow is struggling financially and told Tackett she thinks she will be forced to sell her home to cover the cost of her husband’s unpaid medical bills. Tackett urged her to try to hold out for the high court’s decision.

Tackett told her that if the justices rule for the retirees, then M&G Polymers will likely have to reimburse her the nearly $20,000 that her husband and other retirees paid to maintain their company health insurance until the trial court ordered M&G Polymers to resume paying the full premiums.

“We have several people who passed away,” as they awaited the outcome, Tackett said. “We just don’t know how many of them died as a result of not going to the doctor when needed or not getting medication they needed” because they couldn’t afford the insurance, he said.

Court records show that as of Dec. 14, 2011, only 96 of the retirees were still paying the costs imposed by M&G Polymers to cover themselves and their spouses. Some retirees quit the company plan because they found less expensive insurance elsewhere. Others, the court records show, went without coverage.

“It is a huge amount of money when you are on a fixed income,” Tackett said, “I had to spend a big part of my pension on health insurance.”

Tackett started working at the plant when Goodyear owned it. He negotiated contracts and served for four years as president of the local union in the late 1970s and early 1980s, before Goodyear sold the plant to Shell in 1992. Shell sold it to M&G in 2000.

Throughout that time, Tackett said, he believed that language in the collective bargaining agreement guaranteed the company would pay the total cost of health benefits for workers who were eligible for full pensions when they retired. The lawsuitquotes the collective bargaining agreements as saying that workers earning a full pension “will receive a full Company contribution toward the cost of [health care] benefits.”

And the collective bargaining agreement says that if a retiree dies before his or her spouse, then the spouse remains entitled to health benefits until death or remarriage.

The agreement never says the retiree loses the benefit after so many years or must pay a portion of the costs. It also doesn’t say benefits earned by retirees over their work lives end with the expiration of any given collective bargaining agreement.

Even conservative Justice Antonin Scalia seemed to agree with the retirees on that point, saying during the arguments, “It is a reasonable assumption, call it a presumption if you like, that any promise to pay those benefits continues after the termination of the union contract.”

The fact that the collective bargaining agreement never specifically says the benefits must be paid in full by the company for the retiree’s lifetime is not unusual. A law firm with no financial interest in the outcome of the case reviewed collective bargaining agreements providing health insurance for retirees and reported to the Supreme Court that only 26 percent contained at least one clause suggesting that the benefit must be paid for life, while 14 percent contained ambiguous language and 16 percent were silent on the issue.

Previous owners of the plant never questioned the obligation and paid the benefits in full until the retiree and spouse died. In addition, M&G’s demands of Shell show that it knew the obligation was not limited.

Shell allowed M&G to subtract that amount from the price of the Point Pleasant plant.  As a result, Shell paid M&G the costs for those retirees. Now M&G is trying to get paid a second time by demanding those Point Pleasant retirees pay part of their premiums.

Tackett, who lives in Bidwell, Ohio, started work at the plant in 1966. That, coincidentally, is the year that Mothman began terrifying local residents.

As Mothman did, M&G has stricken hundreds of families in this rural West Virginia region with fear. They’re scared they won’t be able to afford health insurance they believed they’d earned. A decision by the Supreme Court affirming the lower courts’ rulings would relieve retirees like 78-year-old Tackett and restore justice in Point Pleasant.