One Percenters Get Their Own Special Social Welfare Deal

15 Feb One Percenters Get Their Own Special Social Welfare Deal

One percenters have it all, extra houses, extra cars, even an exclusive legal defense if they kill, “affluenza,” to keep them out of jail.

But until last week, they felt unfairly denied access to the benefits of social welfare organizations, United Way, Habitat for Humanity and the like. Now, these are rich people, so they wanted special social welfare groups, ones that would solely benefit rich people. And that’s exactly what they got.

The Internal Revenue Service gave it to them. The IRS declared that an association called Crossroads GPS is a nonprofit social welfare group. That makes Crossroads GPS a sibling to agencies like Little Sisters of the Poor, the American Red Cross, and the Humane Society. Except that Crossroads, spawned by Republican strategist Karl Rove, spends every clandestine million dollars it collects to benefit the rich, not to help hurricane victims or homeless veterans or abandoned puppies. 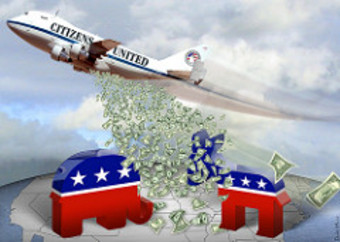 The IRS took five years to review the Crossroads GPS application for nonprofit social welfare status. This seems very odd since Crossroads GPS spent every donated dollar – about $330 million– on politics, either to fund its own campaigns to smear liberal candidates and causes or to fund other organizations devoted to smearing liberal candidates and causes.

Most Americans would need only five minutes to determine that such a group is about politics, not social welfare. And, as a political group, it should not receive the tax breaks that are justly awarded to organizations that serve society by mentoring foster kids and delivering hot meals to elderly shut-ins.

But now, because of the IRS decision, Crossroads GPS doesn’t have to pay taxes on the hundreds of millions it spends to influence elections for the benefit of the one percent. But, probably more important to Crossroads GPS, it can keep its fat cat donors’ names secret because nonprofit social welfare groups are donor disclosure exempt as well as tax exempt.

For actual social welfare groups, this may come from the admonishment in the New Testament that, “when you do a charitable deed, do not sound a trumpet before you.”

But Crossroads donors don’t give a damn about charity. Their only interest is self-interest. They are attempting to elect politicians who will implement policy to further enrich the rich.

They don’t want to sound a trumpet about their bribes, sorry, political gifts, because they don’t want anyone to know who they are. For these donors, there could be repercussions if the public discovered them.

For example, if the CEO of a corporation whose primary customers were Latinos gave millions of dollars to a presidential candidate who said undocumented immigrants were rapists and drug dealers, the stock might suffer.

But now the CEO can surreptitiously slide money to Crossroads GPS with the absolute assurance that his name will never be revealed.

Also, some of this dark money is drawn directly from corporate coffers, not from CEO pockets. Stockholders may be generally unhappy with the amount of corporate money spent on politics but enraged if they knew it went to groups they loathe like Crossroads GPS.

One percenters expect a return on these political investments and have made that increasingly clear. Here’s what Republican lobbyist and donor Theresa Kostrzewa told the New York Times, “Donors are demanding a lot these days, man, and they want answers and they want results.  .  . Donors consider a contribution like, “Well, wait, I just invested in you. Now I need to have my say; you need to answer to me.’”

Five years ago, the U.S. Supreme Court set this in motion with the democracy-killing Citizens United decision, which handed the one percent license to buy elections. In October, the New York Timesreported that one result is that not since before the Watergate scandal have so few people and businesses provided so much early money in a presidential campaign. The total, the Timesfound, was $176 million from just 158 one percenters and their companies.

That was the reported money from the reported donors. The American public will never know the rest of the story on “nonprofit social welfare” groups’ political spending.

Even before Crossroads GPS, the IRS had granted social welfare status to virtually every political group that sought it, from the right wing Koch network to the liberal David Brock American Bridge 21st Century Foundation. The decision on Crossroads GPS is significant only because of the group’s enormous wealth.

The IRS tried to write rules governing these groups, but Senate Majority Leader Mitch McConnell did the bidding of right-wingers and inserted in last year’s spending bill two provisions to stop that.

One of Mitch’s provisions prohibits the IRS for the next two years from issuing rules defining social welfare. The other blocks the Securities and Exchange Commission from forcing corporations to disclose their donations to dark-money groups.

So thanks to Mitch, one percenters can continue for at least two more years to depend on their dark money to feed politicians like foie gras geese, with every expectation of the same rich return.