The report says Chevron knew the pipe that ruptured was made of material likely to corrode, that pipes of the same material at Chevron plants had previously failed and caused fires, that Chevron repeatedly rebuffed experts’ recommendations to replace the pipe, and that when the pipe did begin to breach, Chevron disastrously attempted to patch it instead of shutting down the high-pressure, high-temperature hydrocarbon process unit to which it was attached.

For neighborhoods around the refinery, the upshot of all of those decisions by Chevron was a nearly six-hour order for residents to remain indoors as their homes were engulfed in smoke and soot. Approximately 15,000 received medical treatment for breathing difficulty, chest pain, headaches and eye irritation. Twenty were admitted to hospitals. Incredibly, 19 workers caught in a highly flammable vapor cloud all survived with only minor injuries.

Because of oil companies’ bad-faith bargaining and other serious unfair labor practices, more than 5,000 refinery workers who are members of the United Steelworkers (USW) union are conducting unfair labor practice strikes across America. Those at Richmond are among 25,000 USW-represented refinery workers still working, but they strongly support the demand for safety and they’re strongly supported by Richmond residents who know they’re endangered when workers are. They all want refineries to become good neighbors. 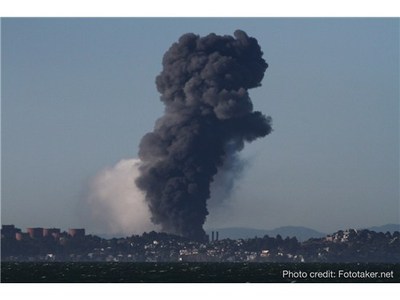 Smoke rises from Chevron refinery in Richmond, Calif., during 2012 fire.

The Aug. 6, 2012 fire at Chevron was the latest in a long list of failures that spewed toxins into the community. In a lawsuit against Chevron for the 2012 smoke deluge,Richmond cited 14 incidents over the past 25 years. That’s very nearly one every other year.  They include major explosions and fires in the plant and smoke overwhelming the community in 1999 and 1989. In those two, a total of 11 workers were injured, three critically.

More recently, in 2007, a failure caused by sulfidaton corrosion resulted in a huge fire. In that blaze and smoke plume, a worker was injured and community members ordered to stay indoors for five hours. Richmond area residents suffering breathing problems packed emergency rooms. That exact type of corrosion led to the 2012 fire as well.

The refinery industry has known about the dangers of sulfidation corrosion for 40 years. That specific corrosion has caused repeated problems at refineries and, as a result, in surrounding communities.

For example, a sulfidation corrosion breach occurred in 2009 at the Silver Eagle refinery in Woods Cross, Utah. The Chemical Safety Board (CSB), the federal agency that investigates refinery disasters, reported that the corrosion led to a 10-inch pipe failing catastrophically, releasing hydrogen, which exploded, triggering a massive fireball. The blast damaged hundreds of homes in the surrounding community,knocking cupboards off walls, blowing out windows and doors, cracking curbs and foundations.

From up close and personal experience, Chevron knew for a decade what the corrosion could do. In 2002 at its Salt Lake City refinery, sulfidation corrosion caused a pipe failure and fire.

After that, Chevron inspected the Richmond facility for similar weakness and expertsrecommended the refinery replace the pipe that ruptured in 2012. Chevron didn’t do it. The CSB found that specialists advised replacement four more times. Chevron never did it. That’s not a good neighbor.

A year after the disaster, Richmond sued Chevron, alleging it willfully disregarded public safety.  Gayle McLaughlin, then the mayor, said, “This is not about money, although there are certainly costs attached to the impact of this fire. This is about a change in Chevron’s corporate culture, to place safety of the community as a top priority.”

The allegations in Richmond’s lawsuit are supported by state and federal agencies’ investigative reports. The California Division of Occupational Safety and Health issued 25 citations against Chevron for the 2012 fire and charged it the highest penalty in the agency’s history, nearly $1 million. And Chevron pleaded no contest to six criminal charges arising from the 2012 fire and agreed to pay $2 million in fines and restitution.

Still, Chevron belittled Richmond for the lawsuit. Its spokesperson, Melissa Ritchie, said: “We believe the decision to pursue such a suit is a waste of the city’s resources and yet another example of its failed leadership.”

Then, Chevron spent $3 million to buy itself the mayor’s office and three council seats in the town of 107,000. It failed. It won not one race against opponents who spent less than $160,000. Richmond residents don’t care how rich a neighbor Chevron is. They wants a good neighbor.

After the fire, Richmond residents, environmentalists and USW members began working together in a coalition called the Refinery Action Collaborative to protect the safety and health of refinery workers and citizens living near the Richmond refinery and five others located within a 25 mile radius in the San Francisco Bay area.

Michael Smith, who has worked at the Chevron refinery in Richmond for 13 years, serves on the collaborative as a representative of his local union. Previous coalitions have not typically included workers, but this one understands their role, Smith said. “The workers are the front line of the community. If we are safe, then the community around the refinery is safe.”

In the past, Smith said, Chevron deployed a successful divide and conquer strategy, telling workers that the community and environmentalists were trying to shut the refinery and kill jobs. Now, however, the three groups understand their shared interest, which is maintaining a clean-operating, tax paying, job sustaining facility. “We want them to run it safely, to be a good neighbor, not shut it down,” Smith said.

Tom Butt, Richmond’s new mayor, is among the candidates who defeated the Chevron slate. Before the 2012 fire, Butt said, Chevron had always insisted safety was its highest priority. However, every investigative report on Chevron’s behavior proved that wasn’t true, the mayor said.

“They are certainly a rich neighbor.  But I can’t say that has made the neighborhood improve,” said Butt, who has lived in Richmond for 42 years.

Mike Parker, who worked to support Butt and the progressive slate of candidates that won, lives less than a mile from the refinery.

He said after the fire, black particles and soot settled on everything – cars, homes, vegetables in gardens. “It was clear that people were breathing a lot of this stuff,” he said. And they didn’t know what was in it.

Later, when residents read the investigative reports, he said they were angry, “This wasn’t an accident or an act of God. This was a result of conscious policy of a company to cut corners.”

Parker said he hopes Chevron will be changed by the many forces now working together for safety because at this point, “Chevron is a very arrogant neighbor, one who seems to totally run on the basis of it has the money and therefore it can get its way.”