Sucker punched by massive, illegally subsidized imports, American steel producers laid off thousands of workers in bedrock communities from Ohio and Illinois to Texas and Alabama.

That’s in just the past three months.

The families of furloughed workers are struggling to pay mortgage bills. The communities, losing tax dollars, are canceling needed road work. The companies are talking about the similarities between now and the 1990s when half of the nation’s steel firms disappeared. Members of the Congressional Steel Caucus are worrying about the effect on national security if America can’t make its own steel for guns and tanks.

Virtually everyone who testified last week at a Congressional hearing on the state of steel fingered bad trade as the culprit in the current collapse. Lawmakers, steel company executives, industry group leaders and a vice president of the United Steelworkers (USW) union all agreed on this. Foreign firms, particularly those operating in non-capitalist countries, are violating international trade regulations. Those rules also require American companies, communities and workers to forfeit a pound of flesh before trade enforcement can occur. They’re failing America. 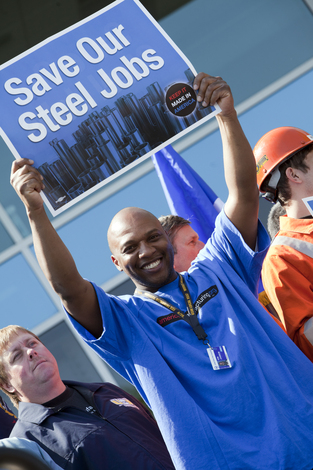 Just seven days into 2015, U.S. Steel said it would lay off 636 workers at its Lorain, Ohio, tubular plant. Before January’s end, the company announced it would furlough 2,000 workers at three locations in Alabama and Texas. In February, U.S. Steel disclosed plans to close its Gary, Ind., coke plant, displacing 300 workers. Early in March, U.S. Steel revealed the loss of another 83 jobs at its Gary Works, for a total of 780 there this year, as well as 412 at one of its iron-ore operations in Minnesota. Later in March, the company said it would indefinitely shut down its Granite City, Ill., milland lay off 2,080 workers.

China produced as much steel last year as the rest of the world combined. It continued doing so despite dwindling demand within China as both its real estate development and economy cooled.

The USW and U.S. producers have won trade case after trade case involving Chinese-made steel because it violates international regulations forbidding government subsidization of exported products. Those improper subsidies lower the price. When trade regulators determine that Chinese producers violated international rules and place tariffs on a particular steel product increasing its price, China ships a different one. In addition, though it’s not considered in trade cases, China manipulates the value of its currency so that its exports are cheaper.

At the Congressional hearing last week, John Ferriola, CEO of Nucor, a non-union steel company, described the situation this way:  “Blatant foreign government support of their steel industries has resulted in a glut of global steel production. A brazen disregard for international trade rules has led to the dumping of steel products in our market. As a result, one in three tons of steel sold in the U.S. today is produced abroad by less efficient, less safe, and less environmentally friendly countries. Our government must take a much tougher line with countries that break the law.”

This is not whining from uncompetitive producers. The European Union, Korea, Australia, even low-labor-cost India, are investigating whether China is dumping steel in their countries in ways that violate international law.

U.S. Steel’s Longhi talked about the consequences for national security if nothing is done.  “We do not build a steel plant in an emergency,” such as war, he told lawmakers last week. Instead, he said, “we rely on it” to already exist and quickly fulfill national needs.

He noted that during World War II, his company produced 90 percent of the steel used to make 21 million military helmets.

“In a moment of exceptional need for the steel required to maintain its strength, America makes a local call,” he told the Congressmen. It doesn’t call China.

Dumping means companies like U.S. Steel and Vallourec USA that have invested billions in modernizing and expanding their American mills face financial difficulty. The same is true of furloughed workers and their communities.

Granite City Mayor Ed Hagnauer said that while the U.S. Steel plant in his town was shut down in 2008, ten times as many residents sought help at food banks. Granite City business owners are concerned about U.S. Steel’s indefinite shut down beginning in May because mill jobs pay good, middle class wages that 2,080 laid off workers will not have to spend.

The lost jobs also mean lower tax revenues for towns and school districts. In Lorain, Ohio, now hit by layoffs at Republic Steel and U.S. Steel, Mayor Chase Ritenauer saidthat to balance the budget he would have to consider scaling back city projects and leaving job vacancies open.

For this to stop, USW Vice President Tom Conway told the Congressmen at the hearing, trade laws must be fixed. “I understand aggressive enforcement of trade laws, but aggressively enforcing a lousy law does not get you much,” he said.

“The continual failure and weakening of our laws is killing us, and it is time to rewrite our laws,” he added.

The laws should not require draconian damage before trade sanctions can be imposed, he said, and Congress must stop the swindle called currency manipulation.

No new trade deals, such as the proposed Trans-Pacific Partnership (TPP), should be approved without these changes, he said. In addition, Congress certainly should not prohibit itself from amending proposed trade agreements by fast-tracking them, he said, because the price of bad trade is too high.