Jeb! Bush, a boy born to wealth and privilege, whose family owns not a home but a compound of dwellings in Kennebunkport, Maine, and whose wife plunked down$25,600 for one pair of earrings, lectured last week that Americans should work longer hours.

If Americans would just work harder, every one of them could own a $600,000 getaway cottage, like the one Jeb! is building on a $1.4 million site in exclusive Kennebunkport.

And it’s not just longer hours. Jeb! believes Americans should work longer in life too. The rich boy wants to raise the retirement age to 70. But raising the federal minimum wage to help millions of struggling workers survive to age 70? No, Jeb! doesn’t see any need for that. His advice: Let working poor great-grandmas eat ramen! 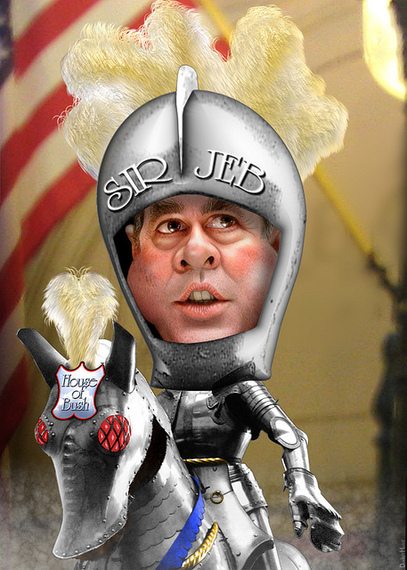 As a result of Bush’s “work harder” scolding, Americans know exactly what that symbol is at the end of the name Jeb! on all of his presidential campaign literature. It’s a whip handle and blood splotch. As President, he’d crack Americans into shape!  Under a Jeb! administration, he’d demand they work more, get less and through it all gaze adoringly at another clueless, pampered Bush in the White House.

The wealthy like Jeb! made out like bandits over the past 40 years – Jeb! amassed $29 million in the eight years since he left the Florida governor’s mansion. But working Americans have not prospered. Their productivity rose, but not their wages. Part of the reason for that productivity increase is that Americans worked longer hours and corporations paid them nothing for it.

American workers put in more hours than those in any other large industrialized country, according to the Organization for Economic Cooperation and Development. In a Gallup poll late last year, full-time employees reported work weeks averaging 47 hours. That is nearly a full day beyond what is supposed to be a 40-hour work week. Forty percent said they work at least 50 hours.

Most of these workers don’t see an extra dime for all that extra work because the federal overtime regulation is so outdated, and many corporations won’t pay time and a half for hours worked beyond 40 unless forced. As it is now, the regulation requires corporations to pay time and a half only to workers earning salaries less than $23,660 a year. That is so low that only 8 percent of salaried workers qualify for overtime. It means corporations can take every cent of gain from 92 percent of salaried workers when they put in more than 40 hours a week.

Here’s what he said on Thursday: “I think people want to work harder, to be able to have more money in their own pockets – not to be dependent upon government. You can take it out of context all you want, but high, sustained growth means people work 40 hours rather than 30 hours, and that by our success they have money – disposable income for their families to decide how they want to spend it rather than getting in [a welfare] line.”

Silver-spoon Jeb! is just wrong. People don’t want to work harder. They’re working almost an extra day a week. What they want is to be paid fairly for the work they’re already doing. They want the minimum wage increased so that they can use their own paychecks for groceries instead of food stamps. They want the money that they’ve earned to be in their pockets – not in the pockets of 1 percenters like Jeb!

For decades after World War II, income rose in tandem with productivity. Then, in the mid 1970s, that stopped. Workers received less and less, and the top 1 percent took more and more. The result was wage stagnation for workers and income inflation for CEOs. 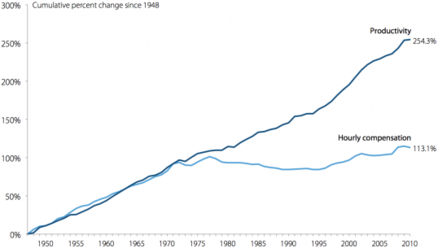 The comments Jeb! made last week illustrate his complete misunderstanding of that.He said: “My aspirations for the country, and I believe we can achieve it, is for 4 percent growth as far as the eye can see .  .  . Which means we have to be a lot more productive. Workforce participation has to rise from its all-time modern lows. It means that people need to work longer hours and through their productivity gain more income for their families. That’s the only way we are going to get out of this rut that we’re in.”

Jeb! suffers from the Republican blame-the-worker syndrome. He says, “Workforce participation has to rise,” as if unemployed workers chose to be laid off and languish in a life of insecurity without regular paychecks.

Jeb! and his GOP buddies should blame those actually at fault: the nation’s highly profitable corporations that cheat America’s highly productive workers. Corporations need to rise to the occasion and hire workers at decent wages. Corporations must reward workers for their increased productivity by paying them time and a half when they work longer hours.