Republicans have adopted a Halloween-themed campaign strategy that they hope will incite voters to run screaming from Democrats.

The GOP message: Americans should be very, very afraid because the homeland is under attack from ghouls and goblins manifest as Ebola and ISIS. Republicans even threaten boogeymen in the form of ISIS suicide agents strapping themselves with Ebola virus vests and sneaking across the southern U.S. border.

This embrace of Halloween tricks is not surprising from the party pushing voter suppression while masquerading as a democracy-loving founding father.  The GOP is warning Americans that they should be scared witless of impending government disintegration because a guy with a knife got into the White House. This “caution” comes from the political party that favors government disintegration. Republicans have, after all, repeatedly shut down government and announced their intention to drown it in a bathtub. Republicans want America to summon the GOP to save the day, like it’s the political version of Ghostbusters. Most Americans, though, see right through the GOP, like it’s a gooey glob of ectoplasm. 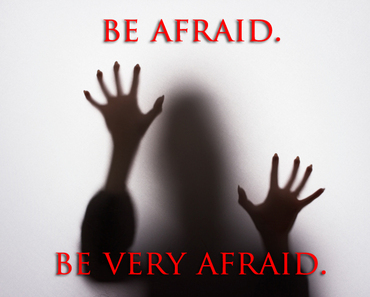 Halloween, with its blood and gore, witches and werewolves, is a children’s holiday because its horrors are fictional. Republicans have picked up on that theme for their Halloween fear-mongering. Fabricating characters and events to induce terror is just part of the GOP-Halloween scheme.

Unlike Hunter’s flashlight-in-the-face, camp-tent tales, ISIS and Ebola are real. ISIS has beheaded several Westerners overseas and Ebola has killed one person in the United States – a man who contracted the disease in West Africa.

Both can elicit fear. But more immediately frightening and more justifiably alarming to most Americans are other threats that Republicans have refused to help resolve.

For example, sickening, paralyzing and even killing children across America is Enterovirus D-68. It has been diagnosed in more than 600 people in 45 states and the District of Columbia, virtually all children. The Centers for Disease Control (CDC) believes it may have killed five patients, and confirmed last week it caused the death of a 4-year-old New Jersey boy last month. Unlike Ebola, which is transmitted through body fluids, Enterovirus D-68 is vastly more contagious, spread through the air like common cold germs.

The “sequester” and other budget cuts demanded by Republicans reduced the CDC budget by more than $1 billion in 2013, including hundreds of millions slashed from programs intended to intervene in situations like Enterovirus D-68. Republicans aren’t offering to restore that money to help save children from paralysis and death. The parents of that New Jersey 4-year-old are living with the very real nightmare of losing him.

Similarly, the lack of health insurance threatens the lives of thousands of Americans. Millions still don’t have coverage, partly because Republican governors and legislators have refused to expand Medicaid under the provisions of the Affordable Care Act. A study by Harvard and the City University of New York found that each year between 7,115 and 17,104 people will die because their states denied them health insurance through Medicaid. That is a real horror. And it is one created by Republicans.

To distract Americans from that reality, Republicans are running around screaming, “ISIS is coming! ISIS is coming!” GOP candidates are broadcasting chilling ads warning of imminent attacks by terrorists and exploiting footage provided by ISIS of beheadings.

Even so, Americans know the GOP won’t protect them. Americans recall quite clearly that it was during the administration of Republican George W. Bush that the 9/11 attacks occurred. They know that same GOP president lied about weapons of mass destruction to terrify Americans into an unprovoked war with Iraq. And they remember that for all of Bush’s bravado about hunting down Osama bin Laden, he failed. It was Democrat Barack Obama who actually did it.

As he took office in the depth of the Great Depression, Franklin Delano Roosevelt told the American people, “The only thing we have to fear is fear itself – nameless, unreasoning, unjustified terror which paralyzes needed efforts to convert retreat into advance. In every dark hour of our national life, a leadership of frankness and vigor has met with that understanding and support of the people themselves which is essential to victory.”

Republicans are urging Americans to devolve into helpless cowards fearing fear itself. While barely acceptable as a Halloween prank, it’s offensive as a national strategy.