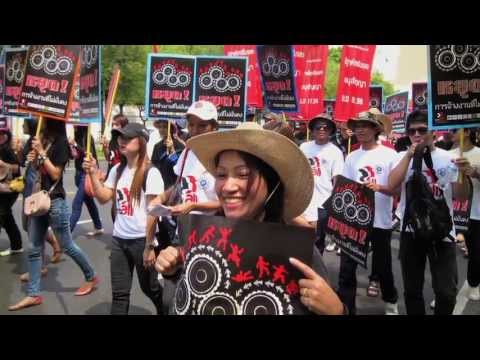 So she focused on being very, very good. She earned straight A’s. She presented papers at academic conferences, including at Princeton. She sweated over her instructional duties, earning rave reviews from her students. She served as an officer for academic organizations and helped plan educational events.

But then, to her horror, with $90,000 in student debt and a family to support, she discovered good people don’t always get good jobs. Against her will and her efforts, Gainer joined the world’s growing ranks of marginalized workers. They live precariously, without health insurance, without a living wage, without a schedule for duty, without a guarantee of work the next week or month. 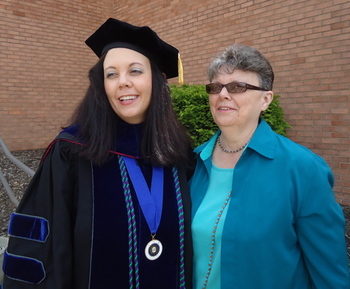 Mary Grace Gainer with her mother after doctoral ceremonies.

This mounting army of workers worries incessantly and survives only because of government and family assistance. CEOs and corporations gorge themselves on profits made on the suffering of workers trapped in this life of frightening instability called the precariat.

To reverse this dangerous trend, the International Trade Union Confederation created the World Day for Decent Work six years ago. On Oct. 7 this year, my union, the United Steelworkers (USW), as well as the IndustriALL Global Union, representing 50 million workers in 140 countries, and others around the world will demonstrate against this corporate scheme.

Mary Grace Gainer will be among those protesting. When this woman with a PhD in English discovered in February that she was pregnant, she no longer had health insurance and was unsure where she would get her next paychecks, even after years of teaching full-time at Indiana University of Pennsylvania.

IUP’s English Department had cut her classes, and thus her pay and benefits, to the point where her two children qualified for the state-subsidized child health insurance program. The university did the same to a dozen other professors who had hoped, like Gainer, to soon be on the tenure track. Her partner, a military veteran, had struggled to find work until ultimately he secured a job driving a school bus for $57 a day, but no benefits. Her wages dramatically reduced, Gainer could not afford health insurance for herself.

As a result, Gainer was living without stability, like millions of restaurant and retail workers around the country. The New York Times this year has repeatedly documented the plight of these workers.

Shoving workers into the precariat like this is the manifestation of corporate greed. That’s clear because some retailers and restaurants including Macy’s, Bloomingdale’s, and Modell’s Sporting Goods stores in Manhattan make profits while treating workers fairly. In many of these cases, the workers are represented by unions that bargain for better conditions. That includes schedules posted weeks in advance, full-time work, vacation and sick pay and health insurance coverage.

The world’s third-largest mining company demanded in 2012 that the 780 union workers at the Alma, Quebec, aluminum smelter allow Rio Tinto to replace retirees with new hires who would be denied membership in the USW, who would receive half pay, and who would get substandard benefits.  When the union refused, Rio Tinto locked the workers out. It took six months, but Rio Tinto finally backed off.

As individuals, workers would not win such a fight. Mary Grace Gainer knows that. And that’s why she supported the ultimately successful effort by Point Park University adjunct professors to be represented by the USW’s Adjunct Faculty Association.

When Gainer finished her PhD and taught full-time at IUP, she earned $55,000 a year, as well as full health and retirement benefits. She had to apply for this position every year, but after five consecutive full-time years, she could have sought a tenure track position, providing more job security. But IUP prevented Gainer and a dozen colleagues from getting that far.

Suddenly, in the summer of 2013, IUP’s English Department told them it would no longer assign them full teaching schedules. They would be replaced with students studying for advanced degrees.

Gainer then sought work as an adjunct professor at Point Park. Adjuncts are hired to teach a course or two, a semester at a time. Point Park told her it would pay $2,244 a semester for each class. With preparation and instruction time, grading, and meetings with students, adjuncts figure that’s less than minimum wage — for workers with master’s and doctorate degrees. They get no benefits. They don’t know from semester to semester how many courses, or which courses, universities will assign them to teach.

While raising tuition at more than twice the rate of inflation, colleges and universities are subjecting more and more teachers to precarious lives. Now, three-quarters of university instructors are underpaid adjuncts.

Gainer feels university officials misled her about what would be possible if she got her PhD. “You do everything right and you think you are going to make it, and you don’t,” she said.

Pressing people into the precariat can’t continue, she said. “People are really, really hurting. People can’t live like this. I think it is going to collapse in some way. I see nurses and teachers and fast food workers going out on strike and unionizing. I hope we are on the track to taking the economy back somewhat from the mess it has become.”

Guy Standing, a professor at the University of London who has authored two books about precarious work, wrote recently that workers will rise up to oppose the economic forces condemning families to insecurity as they recognize “that their situation is not due to personal failings.”

Those who know it’s not their fault that good people don’t get good jobs will demonstrate on World Day for Decent Work. USW members employed at Rio Tinto facilities in Alma, Labrador and Utah, adjuncts like Gainer, workers in the precariat and their sympathizers worldwide will demand justice.

Mary G. Gainer is looking for a job around Indiana, Pa., that would enable her to use the writing and teaching skills she developed studying for her doctorate in English and take her family out of the precariat. Here is her professional information on LinkedIn.

To join the IndustriAll Thunderclap against precarious work, click here.