Speaking just like an American Republican, the Communist Chinese-appointed leader of Hong Kong, Leung Chun-ying, said last week that if the state granted democratic rights to its poor and working class, they could dominate elections and choose leaders who would meet their needs.

Mr. Leung fears rule by the majority – just as U.S. Republicans do. It’s the reason the GOP has launched a massive voter suppression campaign across the country. Republicans believe in rule by and for the one percent. To accomplish that, they must do what Mr. Leung and the Chinese Communist party did: foil democracy. That’s the GOP goal when it subverts America’s precious one person-one vote equality. Every American who holds democracy dear must do whatever it takes to defy GOP attempts to deny them access to the ballot next week. 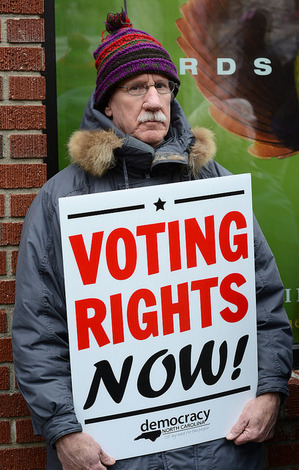 Protesters demanding democracy in Hong Kong have thronged streets and faced down baton-wielding police for three weeks. Mr. Leung’s anti-democracy remarks further inflamed the demonstrators who live in a state with among the highest income inequality in the world. Mr. Leung said he could not allow the state’s majority – workers and the poor – to choose nominees because then those candidates would address the demands of the majority.

“If it’s entirely a numbers game and numeric representation,” Mr. Leung said, “then obviously you (candidates) would be talking to half of the people of Hong Kong who earn less than $1,800 a month.”

That is exactly who Republicans don’t want to talk to – America’s middle class and working poor. The GOP presidential candidate, quarter-billionaire Mitt Romney, said that it was his “job not to worry about those people” who are elderly or too poor to pay federal income taxes. To make sure Republicans can focus on the rich and forget the rest, they’ve passed a multitude of laws to stop the working poor, seniors, people of color, women and students from voting. The intent is to prevent them from choosing who will run the government that, in a democracy, is supposed to represent them.

The Brennan Center for Justice calculated that if all the suppression laws passed by nearly two dozen states in the past five years took effect, 5 million citizens would confront new obstacles to exercising their right to vote. The laws would likely deny suffrage altogether to some citizens, such as those lacking birth certificates because they were born at home.

In a fourth, Wisconsin, the court temporarily barred the voter ID mandate. The Supremes will hear the case later and may allow the state to demand specific identification. That would be ID requirements that Federal Judge Lynn Adelman determined could disenfranchise 300,000 Wisconsin voters, particularly poor and minority citizens, because they lack the requisite documents.

Judge Adelman, who ruled the law unconstitutional, concluded that in Wisconsin, there were no cases of the in-person voter fraud that Republicans claim the law is intended to prevent.

Texas was among the three states that Republicans on the Supreme Court granted permission to begin demanding specific voter identification. The court ignored the fact that Texas passed the law within hours after the Republican Supremes gutted the Voting Rights Act.

The court ignored the fact that the trial judge in that case, Nelva Gonzales Ramos, calculated that it could disenfranchise 600,000 voters, particularly black and Hispanic Texans. These are citizens who don’t have a gun permit or driver’s license allowed as voter identification by the law, but who do possess other ID, such as student cards, forbidden by the law.

The court ignored the fact that Judge Ramos found only two cases of in-person voter fraud out of 20 million ballots cast in Texas over 10 years.

Consider what red, white and blue-wearing, flag-waving, democracy-praising Republicans have said about their voter suppression campaigns.

Georgia state Rep. Fran Millar complained about a decision to allow Sunday voting in a location near a mall that, as he described it, “is dominated by African American shoppers and it is near several large African American mega churches such as New Birth Missionary Baptist.”

When accused of racism, he said, “I would prefer more educated voters than a greater increase in the number of voters.”

In other words, he only wants some people to vote, not all people.

In Ohio, where Republicans tried to allow GOP-dominated counties to add hours for early voting but deny it in Democratic areas, Doug Priesse, the chairman of the Republican Party in Franklin County, where Columbus is located, said it was fine to make voting more difficult for black citizens:

“I guess I really feel we shouldn’t contort the voting process to accommodate the urban – read African-American – voter-turnout machine.”

In Pennsylvania, the Republican House Majority Leader Mike Turzai shepherded voter ID through the legislature in 2012, then announced  to a GOP gathering: “Voter ID, which is going to allow Governor Romney to win the state of Pennsylvania: done.” In other words, the law would stop voting by the working poor, minorities, student and others who tend to vote for Democrats.

The ACLU got an injunction to stop the Pennsylvania ID law. President Obama won the state. And the state Supreme Court later ruled the law unconstitutional.

The rich are represented in government, and as a result, highly profitable oil companies get tax breaks. Wall Street gets bailouts. And one percenters get tax deductions for yachts. By contrast, no one bailed out underwater homeowners.Twenty-four states refused to expand Medicaid to millions of working poor citizens. And the federal minimum wage hasn’t been raised in five years.

In a democracy, there’s nothing more important to securing representation in government than the vote.  Don’t let Republicans take it from you.

Get free promo codes and toms coupons by visiting the site.

Photo by Stephen Melkisethian on Flickr, taken Feb. 8 at Shaw University in Raleigh, N.C. during a Moral Monday Movement rally.