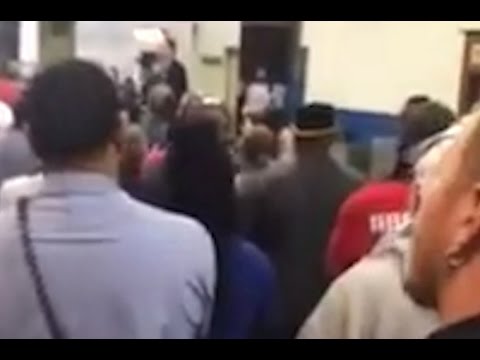 Everything is great, right? Unemployment is the lowest in half a century [3]. The economy is churning out a high GDP [4]. Home values [5] are rising rapidly again. Inflation remains low.

Still, the stock market has been crashing in recent weeks. Investors don’t like President Donald Trump’s trade war with China [6]. It makes them nervous.

Nervous. They have no idea. Since 2001, when the United States agreed to allow China into the World Trade Organization, U.S. workers have been nervous every day. Twenty-four hours a day. Three hundred and sixty-five days a year. They fear losing their jobs to China. And rightly so. A study by the non-partisan Economic Policy Institute [7] (EPI) released this week shows the growth in the U.S. trade deficit with China between 2001 and 2017 cost 3.4 million American workers their jobs. [7]

Trump’s tariff war hasn’t solved this problem. The August trade deficit with China was the highest on record, at $38.6 billion [8], and the deficit for 2018 is projected to be the largest ever. The trade deficit—that is, the billions more that China sells in the United States than the United States sells in China—is what kills jobs. As that deficit rises, more work to produce goods and services is done in China. If the deficit declined, or trade balanced, more work would be done in the United States. That is the administration’s goal. If it could be accomplished, workers’ job anxiety would ease.

Of the jobs lost between 2001 and 2017, nearly three-quarters were in manufacturing—2.5 million. Those were good, family-supporting jobs. The shock, fear and anger workers feel when they learn that their factories will close and that their work will be moved offshore is palpable in the viral video of Carrier officials [9] telling 2,000 workers in Indianapolis in 2016 that the corporation intended to close their factory and ship the jobs to Mexico.

Among the 2.5 million who lost jobs since 2001 is Lisa Crissman of Western Pennsylvania. She was struck down twice. The second time was earlier this year when her employer, Pittsburgh Glass Works, laid her off as it prepared to permanently close its auto windshield factory in the little town of East Deer, Pennsylvania, and move half of the work to Mexico.

The first time it happened was in 2012 when the auto mirror manufacturing company Flabeg closed its Brackenridge, Pennsylvania, factory. The year before, Crissman and her Flabeg co-workers had made 14 million auto mirrors in Brackenridge, accounting for 70 percent of the domestic market.

At both jobs, Crissman was a member of the union I lead, the United Steelworkers, and made good money and got good benefits. The Flabeg workers received federal Trade Adjustment Assistance because the company offshored the work. Flabeg told the federal government it was transferring mirror fabrication to China and Brazil because its American factory couldn’t compete with low-cost mirrors imported from Asia. It closed the Pennsylvania plant for cheap labor and lax environmental protections overseas.

Crissman lost her job to an underpaid worker denied union benefits in China. Her husband, coincidentally, lost his job at about the same time when the hydroelectric plant where he worked was sold, and the new owners laid off workers with the most seniority. Crissman recalls her daughter fearing that the family would lose their home to foreclosure.

That is the way U.S. factory workers live now: nervous. Any day could be their last on the job. Any day, their work could be shipped to China. Finding new work that pays a living wage is difficult in many places. Crissman managed to get another good job, but then it too disappeared. Multiply her experience times 2.5 million. That’s the anxiety that hovers over U.S. factory floors, no matter how skilled, dedicated and efficient the American workers are.

EPI figures that growing trade deficits with China and other countries altogether cost America 90,000 factories [10] and 5 million jobs in the past two decades.

Small towns across America have suffered just as workers have. After a factory closes, unemployed residents move away for new work, shops close, and mayors lacking tax revenue cut services. The upshot is hollowed-out shells of towns. Pittsburgh Glass Works was the largest employer and taxpayer in East Deer Township. The township, unsure of its finances after Pittsburgh Glass Works announced the closure, immediately postponed improvements at its Memorial Park.

While jobs like those at Carrier and Pittsburgh Glass Works continue to move to Mexico, the trade deficit with China accounts for the majority—78 percent—of the U.S. manufacturing jobs lost since 2001, according to the EPI report titled “The China Toll Deepens.” [7]

The loss was not concentrated in just one state or region, like Michigan or the Midwest. Every congressional district in every state bled jobs. Michigan, famous for auto and auto part manufacturing, is not even among the 10 states that lost the most jobs as a share of total employment. Those are [7] New Hampshire, Oregon, California, Minnesota, North Carolina, Rhode Island, Massachusetts, Vermont, Wisconsin and Texas.

Workers laid off because of trade, like Crissman, lost wages totaling $37 billion per year [7] from 2001 to 2011. But there was another, even more dramatic effect on the earnings of American workers as a result of the growing import competition with China and other low-wage countries. EPI figures imports from low-wage countries [7] cut the earnings of America’s 100 million workers without a college degree by 5.5 percent, or $1,800 per year per full-time worker. The total cost to them—$180 billion in 2011 alone.

That money, EPI says, went instead to CEOs, highly paid professionals with college degrees and corporate profits. It went to the guys who gamble on stocks and who now think a trade war could cut their earnings, guys who probably have no idea what their free trade demands have already cost American factory workers.

When China gained access to the benefits of the World Trade Organization in 2001, it agreed to abide by what are essentially free market rules. But it has not. Its prices are lower because the Chinese government subsidizes exports, providing its industries with perks like loans that don’t have to be repaid, free or cut-rate raw materials, and discounted utility bills. While it suppresses unions that would enable workers to bargain for decent wages, it keeps people employed by subsidizing overproduction of materials like steel and aluminum, then dumps the excess at below-production-cost prices on the international market.

These market-distorting practices kill industries in market economies like the United States, Canada and European Union.

The Trump administration has imposed a series of tariffs on imports, mostly on China, to apply pressure on Beijing to stop violating trade rules. The administration hopes this will begin to cut the trade imbalance and the loss of U.S. factories and jobs.

The researchers at EPI believe it’s not enough, though. They say the dollar is overvalued by 25 to 30 percent, [10] which acts as a tax on U.S. exports and a subsidy on imports. Currency manipulation and misalignment by China, Japan and other countries must be confronted, or the United States will continue to lose its manufacturing might and its vital, middle-class jobs.

This article was produced by the Independent Media Institute [2].