But there’s no liberty and justice for all if Americans aren’t economically independent.  Low wages, debts and dim prospects all subjugate. This is the condition of a shocking number of Americans as income inequality rises. And their economic desperation and subordination occurred by design.

CEOs and right-wing one percenters purchased legislation and court decisions that diverted the nation’s wealth to their penthouses. And despite their promises, not a dime trickles down to the workers whose labor created the wealth and whose productivity has risen even as their wages have not. The decision of the right-wing majority on the U.S. Supreme Court last week in the Harris v. Quinn case is another example of the one percent’s unrelenting erosion of the 99 percent’s economic independence. 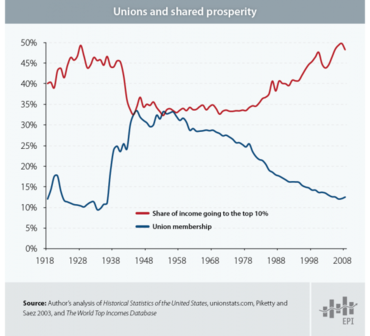 This decision makes it harder for 28,000 home care workers in Illinois specifically, but others across the country as well, to collectively bargain for better wages, benefits and working conditions.

Home care workers, whose lives are devoted to aiding disabled adults, were paid minimum wage in Illinois a decade ago. Job dissatisfaction was high, as was turnover. Shortages of these workers forced the state to institutionalize infirm adults, a significantly more expensive and less satisfactory living arrangement.

Then in 2003, the state took steps that enabled home care workers to join the Service Employees International Union (SEIU) and collectively bargain. Their wages rose to $12.25 an hour. They got health benefits and training. Turnover declined. The state estimates it has saved $632 million because fewer adults went to institutions.

The same was true in Washington state, where home care workers joined SEIU in 2002. Collective bargaining provided them with wage increases of 40 percent, health insurance, paid time off and mileage reimbursement. And like Illinois,Washington saved money because fewer disabled adults ended up in nursing homes.

This solution was great for the vast majority of everyone involved, taxpayers, workers and disabled adults. Here’s what one of those adults, Rahnee Patrick,told a National Public Radio reporter:

“I had a personal assistant come to me at 5 o’clock in the morning in my house. She rode an hour in the snow, from the North Side of Chicago. Why was she so dedicated? Not because I’m lovely, but because she gets a really good wage, and the wage came from the unions being able to collectively bargain. I can actually go to work, and it’s because of her being able to pay her own bills that I’m able to pay my bills.”

Workers say it was a godsend. Dorothy Glenn received $1 per hour when she began caring for her disabled sister in 1972 after taking her out of an Illinois institution where she’d been badly injured. Glenn got no health insurance and no training. She recounts that when she asked for a raise, the state told her that if she didn’t like the pay, she should put her sister back into the nursing home.

“I felt like my sister and I were living in the shadow, and we had no voices,” Glenn told Think Progress reporter Bryce Covert. She said she got a voice when she was able to join the SEIU. “It dramatically changed my life,” she said. The difference is 28,000 workers bargaining collectively with the state instead of one. “As long as we keep our numbers, we have the power,” she explained.

The pay increases and health insurance benefits secured by collective bargaining gave economic independence to tens of thousands of home care workers in Illinois and in states across the country. Their work provided them with sufficient income to pay their bills, support their children, buy an Independence Day picnic spread. Collective bargaining meant they no longer had to depend on the government for health insurance or on food banks for dinner.

Economically independent workers are less easily manipulated and mistreated. That is exactly the opposite of what right-wing one percenters want. What was good for tens of thousands of home health workers was bad for greedy one percenters. So they searched for a way to thwart the system that worked well for workers, invalid adults and the state.

They found it in a handful of home care workers who didn’t want to pay the fair share fee that  was charged to those who benefitted from collective bargaining but declined to join the union.

The NRTW group volunteered to use Koch brothers and Walton family money to pay for a lawsuit seeking legal sanction for these workers to freeload, to reap the benefits of collective bargaining but shirk paying any part of its costs. That’s the genesis of the Harris v. Quinn case.

The NRTW scheme works like this: legalize freeloading to lower revenues available for collective bargaining, and thus diminish workers’ ability to secure better wages and benefits. This robs workers of economic independence.

The right-wing majority on the Supreme Court sided with right-wing one percenters. They ruled that a state can’t require home care workers to pay a fair share. They ruled for weaker collective bargaining and less economic independence.

Illinois home care worker Dorothy Glenn said there’s power in numbers. For many workers, only that power can achieve for them liberty and justice for all.