GOP on Wrong Side of History on Immigration

24 Nov GOP on Wrong Side of History on Immigration

At the first Thanksgiving 383 years ago, Native Americans and Pilgrim immigrants gathered with mutual respect to share a bountiful harvest they’d produced together.

This Thanksgiving, though, there’s no respect or sharing in the homes of GOP nativists.

Suffering amnesia about their personal histories, nativist Republicans want to expel the 11.7 million unauthorized immigrants, the people who harvest America’s Thanksgiving vegetables and care for America’s toddlers and grannies. The GOP has threatened to sue, shut down the government and impeach President Obama to punish him for issuing an executive order giving fewer than half of the nation’s undocumented workers a limited ability to remain in the United States.

Americans would prefer if Congress fixed this problem. But Congress hasn’t. In the year and a half since the Senate passed a bipartisan immigration reform bill, House leaders have refused to permit a vote on it. So now, President Obama, like all 10 presidents since 1965, Republican and Democrat, has issued an executive order on immigration. The order says America will treat 5 million striving unauthorized immigrants with respect. 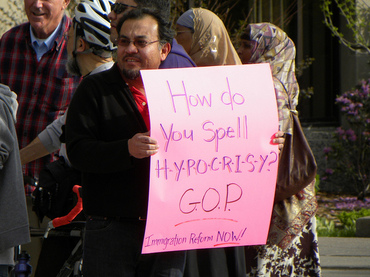 Exactly one week before Thanksgiving, President Obama described his order to the American people. It broadens the “dreamer” program that provides temporary reprieves from deportation to unauthorized immigrants brought to the United States as children. It establishes temporary work authorization for undocumented immigrants who have lived in the United States for at least five years and are parents of American citizens or servicemen. It directs the Immigration and Naturalization Service (INS) to focus on deporting criminals and suspected terrorists and orders Homeland Security to help secure the border.

It disqualifies new undocumented immigrants. Anyone who has entered the United States recently or who enters now without authorization is excluded. The order is limited as well. It lasts only as long as Obama is president. The next executive could continue it. Or kill it.

If such a program had been in place 14 years ago, actress Diane Guerrero, who plays Maritza Ramos on the show Orange is the New Black, would have been spared separation from her parents and brother. Guerrero described her family’s deportation in an op-ed in the Los Angeles Times earlier this month. She was just 14 when she arrived home from school to find lights on, dinner started but her family missing.

Born in the United States, Guerrero was a citizen. Her parents and brother were not. Neighbors broke the news to her that the INS had seized her family and would deport them to civil war-torn Colombia. In the op-ed, Guerrero pleaded for relief for families like hers. President Obama provided it. Thank goodness.

Immigrants like Guerrero’s family don’t enter the United States to take. Like everyone who has has arrived on America’s shores since that first Thanksgiving, these new émigrés work to give their children a better life. Some young undocumented workers today labor to give their parents in Mexico remittances that enable them to survive after NAFTA destroyed their ability to eke out a living from subsistence farms. Americans respect those family values.

Unauthorized immigrants are lured into the United States by the promise of jobs, whether it’s making hotel beds, washing cars or picking produce. Employers want their labor. Farmers who rely on the backbreaking work of unauthorized immigrantsfound themselves with produce rotting in the fields after some states passed anti-immigration laws in recent years.

As Americans bow their heads before passing the turkey platter this week, they should know that President Obama’s executive order is a blessing to native born citizens as well as immigrants. A study by the Bipartisan Policy Center found that immigration reform is good for the economy, while inaction is destructive.

The task force that produced the study, co-chaired by former governors from both parties, said immigration reform would be a powerful instrument of economic revitalization: “The results make clear that reform has the potential to significantly increase the number of young, working-age people in the economy. This influx of labor would spur economic growth, reduce federal deficits, help the housing sector and mitigate the effects of an aging population. By contrast, preventing unauthorized immigration without providing replacement labor would cause severe damage to the economy.”

In addition, reform means immigrants no longer need fear deportation for reporting violations such as wage theft, perilous working conditions and workplace violence. This protects native-born workers because employers who become accustomed to impunity for illegal exploitation of immigrants quickly attempt to abuse all workers.

While unauthorized immigrants have long prayed for reform, 57 percent of native born Americans now believe those entreaties should be answered. The number is higher – 74 percent– if reform includes a path to citizenship, fines, back taxes and background checks.

But a president’s power is limited, and Obama stopped short of extending citizenship. That’s the responsibility of Congress. President Obama asked lawmakers to act: “Scripture tells us, we shall not oppress a stranger, for we know the heart of a stranger. We were strangers once, too.”

At a press conference held last week by groups supporting President Obama’s executive action, Maria Teresa Kumar, president of Vote Latino, told the story of one of those strangers.

During the holidays four years ago, she recounted, a young man who had just finished boot camp and was on his way to deployment in Iraq called her for help. He’d just learned that his father had been detained by the INS. On Christmas Eve, the soldier lost his father to deportation, and his family lost a breadwinner.