GOP: No Bootstraps for You, Baby!

21 Sep GOP: No Bootstraps for You, Baby!

He accomplished that by announcing with pomp and fanfare that, unlike those other Republican pansies, a President Walker wouldn’t stop at crushing labor unions. No. That wouldn’t hamstring the middle class sufficiently for Walker. He’d also deny workers paid sick leave and compensation for overtime. Now those are some real anti-worker, middle-class-hatin’ chops!

In a GOP field filthy with candidates who kiss up to corporate bosses and systematically suppress workers’ wages, Walker is a stand out. But the whole motley GOP crew is determined to do whatever it takes to deny workers and their children economic mobility. Workers organize themselves into unions to obtain the clout they know is essential to persuade powerful multinational corporations to provide decent wages, benefits and working conditions. Unions are a method workers use to pull themselves and their families up economically. Walker and his GOP buddies want to deny workers and their children that bootstrap. 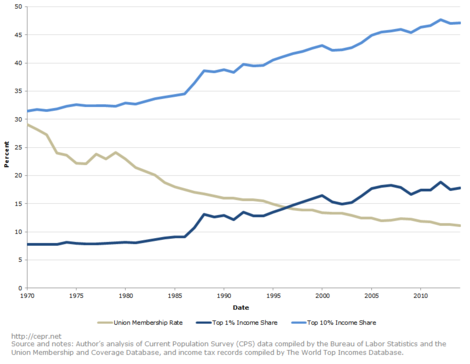 Families across this country have for decades unionized to rise out of poverty and lift their children up to the next level. This is documented in a report issued earlier this month by the Center for American Progress. The research demonstrates that unions provide families with access to the American Dream.

Many previous studies have shown that union members earn more than non-union workers and that states with higher rates of collective bargaining benefit from higher family incomes.

That means collective bargaining provides the added advantage of helping kids who happen to live in union members’ neighborhoods.

“What is clear,” the report concludes, “is that mobility thrives where unions thrive.”

Economic mobility is the American Dream – the ideal that every American has the opportunity to work hard and do better for himself and his family. And that is what Republican presidential candidates want to kill by destroying unions.

GOP presidential candidate Chris Christie, the governor of New Jersey, would start bypunching union teachers in the face. Last month, CNN’s Jake Tapper asked the governor: “Who deserves a punch in the face?”

Not Putin. Not Isis. No, the governor replied: “The national teachers’ union.”

This is the governor who in 2011 demanded that teachers and other public workers fork over more of their wages to help balance their pension account, which the state had underfunded for years. The teachers kept their end to the deal. But Christie punked them – refusing to pay the state’s share.

Despite this betrayal, Christie has asserted, “Unions are the problem.” So, to Christie, the organizations that provide children with upward mobility are the blight on society, not politicians who renege on pledges.

Another of the GOP presidential also-rans, Sen. Rand Paul of Kentucky, would deny all postal workers their right to collectively bargain. And, like Walker, Paul would outlaw fair share fees nationwide.

Employees don’t have to join a union that has organized their workplace, and they don’t have to pay union dues. But if they don’t, they are required in 25 states to pay a fair share fee that covers the cost of union services that benefit them, such as collective bargaining and grievance litigation.

Federal law mandates that the union provide services for all workers, including those who don’t join. The 25 states that prohibit fair share fees deliberately deny unions that income in order to financially cripple them. The likes of Paul and Walker are eager to financially strangle the organizations that provide millions of workers and their children with access to the American Dream.

Walker is running his campaign on his record of crushing unions in his home state of Wisconsin. There, he first revoked government workers’ bargaining rights. Then he outlawed fair share fees for private sector workers. When he attacked public unions, workers and their supporters rallied at the state Capitol.

Walker later compared those demonstrators to Isis terrorists. He actually said that his experience with crowds of American schoolteachers, child welfare workers and firefighters singing, chanting and carrying signs prepared him to deal with murderous enemy combatants who behead and immolate innocents.

In his anti-union screed issued last week, Walker promised that as president, he would kill the federal board that investigates unfair labor practices, annihilate all unions representing federal workers, end fair share fees nationwide, terminate the requirement that contractors on federally subsidized jobs pay workers a fair wage based on local standards, stop mandating federal contractors provide paid sick leave and slash the number of workers who must be paid overtime when they work more than 40 hours.

Sounds like a big, fat pay cut for millions who are struggling to support their families.

Walker, Paul, Christie and the rest of the Republican candidates are doing the bidding of CEOs to sustain the economic pattern that has, over the past 40 years, left the middle class with stagnant wages while the wealthy took for themselves increasingly larger shares of the profits created by the sweat of workers’ brows.

For 40 years after the 1935 National Labor Relations Act facilitated unionization, income inequality declined and workers’ wages rose in tandem with productivity. In the past 40 years, however, productivity continued to rise, but workers’ wages no longer kept pace. CEOs took those gains for themselves, and income inequality skyrocketed to the level it was during robber baron days in 1929.

In addition, membership in unions, the vehicles that give workers the bargaining power necessary to secure their fair share of the profits from rising productivity, steadily declined over the past 40 years. Now, the percentage of organized workers isnearly as low as it was in 1929.

And Americans aren’t too happy about it. When GOP presidential candidate Gov. John Kasich gutted the collective bargaining rights of Ohio public sector workers in 2011, the citizens of that state smacked him down. They overturned the law in a referendum just months later – a ballot measure Kasich lost 61 to 39.

They want that bootstrap for their kids.