Alan White couldn’t shout jubilation from the rooftop on March 25 when he heard that the U.S. Department of Labor, after decades of trying, had finally issued a stricter rule to limit exposure to potentially deadly silica dust in workplaces.

He was happy, all right. After all, he’d worked with the United Steelworkers (USW) to get the rule adopted. It’s just that he knew shouting would induce his silicosis coughing.

Within days, though, indignation replaced his jubilation. White, who’d been sickened by the debilitating, irreversible and often fatal disease at work in a foundry, watched in disgust as Republicans attempted to overturn the rule that the Labor Department said could save more than 600 lives and prevent more than 900 new cases of silicosis annually.

Last week, GOP House members conducted a hearing to further their case against saving those lives. They did that just days before Workers Memorial Day, April 28, when organized labor renews its solemn pledge to strive for workplace safety rules and formally commemorates those who have died on the job in the previous year. 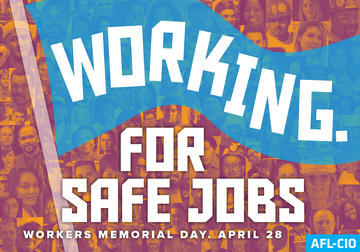 But the GOP position is clear. Republicans will do whatever it takes to ensure that corporations can sicken and kill workers with impunity. If the argument is that workers’ lives and lungs must be sacrificed to ensure that foundries and fracking operations and construction companies can make bigger profits by releasing silica particles under 40-year-old standards now considered dangerous, then the GOP will take the side of CEOs who value workers as trivial.

These politicians would leave workers like Alan White to be victims of this sneaky, silent killer. Silica, which is in sand and rocks, is released during industrial processes that involve cutting and blasting and cleaning silica-containing materials, such as concrete, tile and brick. About 2 million American workers inhale the tiny crystalline particles in levels high enough to threaten their health, almost always without knowing it. The dust causes workers’ lung tissue to swell and become inflamed. Over time, that causes scarring, and the lungs stiffen, making it hard to breathe.

That condition, called silicosis, increases the worker’s risk ofbronchitis, tuberculosis and lung cancer. The Occupational Safety and Health Administration (OSHA) calculated that the previous exposure limits, which were set more than 40 years ago, were so inadequate that thousands of workers died every year even though their employers were complying with the law.

Alan White’s doctors determined his impairment to be 66 percent three years ago. They described it as progressive massive fibrosis of the lungs. At the age of 51, it means his life is circumscribed. “I went waking around the park and got passed up by a group of elderly women, say in their 70s, like six of them, who were running and talking. I can walk. But I can’t really talk while I am walking. I am sitting still and talking on the phone and getting out of breath,” he told me.

He must be careful about simple chores, like removing lint from the dryer filter. “I can’t just swipe at it because it will make me cough for 10 minutes,” he explained. If he tries to carry a basket of laundry up the 28 stairs, he may be able to make it, he said, “but then I can’t breathe. It is like am breathing in as much as I can and I am not getting enough air.” Anyone who has suffered asthma or has been held under water too long knows the panic that induces.

This crept up on White. He began work in the foundry at what is now called Aurubis in Buffalo, N.Y., in 1995. He stayed in the foundry for 16 years, but with the amount of overtime he worked, averaging 60-hour work weeks and often more than that, he estimates that it was the equivalent of 20 years.

There is silica-containing brick in the foundry furnace. When workers like White cleaned it with air chisels and crowbars, silica would fly into their environment without their knowledge.

White said the employer fitted him for several types of respirators and masks when he was hired, but told him he would need only the dust mask in the smoky foundry area. He believes now, too late, that he should have been wearing a particulate filter.

A decade after White started the job, he noticed he was slowing down and was tired a lot. He attributed it to aging and tried to lose weight and eat better.

In December of 2008, he developed a cough. It lingered through the winter and early spring. In April, just after he turned 44, he went to a doctor who heard something when he listened to White’s lungs and sent him for an X-ray.

The technician looked at the pictures and said to him, “I will be right back. Don’t move.” She brought in the doctor. “You know it is serious when they bring the doctor right in,” White said.

That doctor gave him the name of an expert who ordered a CAT scan. “He put the film on the wall and turned on the light. He knew right away what it was. He said, ‘This is silicosis.’”

White’s daughter was 19. He wondered if he would live to see her marry, to meet his grandkids.

At Aurubis, White is a member of the USW, and one of his doctors knew a USW health and safety expert and linked up the two. That’s how White got involved in the USW campaign to strengthen the silica rule. White testified at hearings, seeking stronger standards to prevent other workers from suffering as he has. And he has met U.S. Labor Secretary Thomas Perez, who cites White’s case as an example of why decreasing silica exposure is so important.

But U.S. Rep. Tim Walberg, R-Mich., chairman of the Workforce Protections Subcommittee of the House Committee on Education and the Workforce, is intent on sending the silica standard back 40 years.

Walberg noted in a press release that the Labor Department’s Occupational Safety and Health Administration (OSHA) concedes that 30 percent of the jobsites it tested did not comply with the previous silica standard.

So, Walberg said, the Labor Department’s first priority should be enforcing that old standard, not creating new, tougher standards that would protect workers better. “If OSHA is unable – or unwilling – to enforce the current limit for silica exposure, why should we expect the results under these new standards to be any different?” he asked.

That, of course, disregards the 70 percent of workplaces that apparently did comply with the law and likely will obey the new regulations to protect their workers. It also deliberately ignores the fact that the Republican-controlled Congress has continuously cut funding for OSHA. Walberg condemns the safety police – OSHA – for failing to enforce the law after slashing the funding that would have enabled the safety police to enforce the law.

But Walberg also is contending that as long as one thing is broken, nothing can be fixed until that one thing is completely repaired. So, for example, as long as banks are being robbed by guys in ski masks, in Walberg’s world, the government should not outlaw cyber account theft. As he put it, “why should we expect the results under these new standards to be any different” when police haven’t stopped the ski mask thieves from breaking into vaults?

Alan White described the Republicans’ behavior as shameful. “It just shows the lack of understanding of what workers go through.”

White, who still works at Aurubis, but in shipping, where he can use a golf cart to get around when he needs to, also said he doesn’t understand why some corporations devalue human life: “At our facility, we buy copper and zinc and tin. Copper is a couple dollars a pound, tin is a few dollars a pound.

“Anyone who tries to take that out of the plant and to a scrap yard to make a few dollars can get fired. Just like you protect your raw materials, the people who do the work to make that raw material into a finished product must have some importance and protection.

“Why not show the same consideration for your human resource to make sure they are not injured?”

On this Workers Memorial Day, let’s make sure humans get better treatment than tin.