Donald Trump puts on a show of being rich. There’s that private jet stamped Trump. He assures everyone, ad nauseam, that he’s really, really rich. But apparently it’s all a sham.

The Washington Post revealed last week that Trump is a charity case. Over the past several years, he repeatedly turned to a non-profit organization to pay his bills for him – more than a quarter million dollars in bills. (#Sad)

If Donald Trump really is a $10 billionaire as he repeatedly claims, there would be no reason for him to beg a foundation to foot his bills. It was fine for Trump to exaggerate his personal wealth while he was nothing but a reality TV star firing contestants for fun. But now that he’s a candidate for president of the United States, he’s got real responsibilities. And one of them is to release his tax returns, like every other presidential candidate for the past 40 years.

Before voting, the American people have a right to know whether Trump is lying about his wealth. But not just that, they have the right to know whether Trump remains among Republicans’ reviled 47 percent, the group that the GOP calls “takers,” because they pay no federal income taxes. New Jersey Gaming Commission records show Trump was a taker in 1978 and 1979, paying no federal income taxes in either year. Is he still paying nothing? That would make him quite a mooch, a welfare king, taking $885 million in tax breaks to construct his gilded buildings in New York and contributing not a cent in federal taxes. The Gipper would not approve. 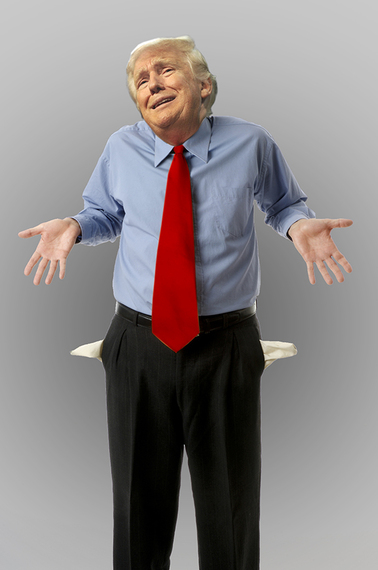 Think Bernie Madoff. The appearance of wealth can be deceiving. Everybody thought Madoff was Midas until FBI agents hauled that Ponzi schemer away in handcuffs. Or think Enron. The corporation looked great. The executives swore it was great. Then suddenly that huge house of cards collapsed.

So is Trump just another Madoff or Enron? He could settle the question by releasing his tax returns.

The Washington Post threw a big monkey wrench in Donnie’s “I’m so rich” assertions last week when it revealed that Trump apparently can’t pay his own bills. To buy toys for himself, to pay legal fees and to make an illegal campaign contribution, Trump has hit up a foundation that he established in his own name, Donald J. Trump, of course. It is, however, a foundation to which he hasn’t given a dime in eight years.

Instead, other people put millions of dollars into the Trump Foundation, expecting it to be spent on charitable causes. The IRS, which grants foundations tax exemptions if they qualify as charities, defines charity this way: “relief of the poor, the distressed, or the underprivileged; advancement of religion; advancement of education or science; erecting or maintaining public buildings, monuments, or works; lessening the burdens of government; lessening neighborhood tensions; eliminating prejudice and discrimination; defending human and civil rights secured by law; and combating community deterioration and juvenile delinquency.”

So the donors to Trump’s foundation probably didn’t think that their gifts would be used to pay Donald Trump’s personal bills.

For example, when Donald Trump wanted a $12,000 helmet signed by quarterback Tim Tebow, and two giant portraits of himself, one costing $20,000 and the other $10,000, he got the foundation to pay for them. It’s a little hard to see how any of that qualifies as “relief of the poor, the distressed, or the underprivileged.”

Then Donnie got the foundation to pay lots more to cover the cost of some of his legal entanglements.

In 2007, the town of Palm Beach, Fla., agreed to waive $120,000 in fines that Trump owed in a dispute over a flagpole at his Mar-a-Lago Club if he donated $100,000 to a veterans’ group. Instead of taking the money from his own pocket, Trump asked for charity. He got the Donald J. Trump Foundation to pay the veterans.

In a similar case, a man named Martin Greenberg felt wrongly denied a $1 million prize when he hit a hole-in-one during a 2010 tournament at Trump’s course in Westchester County, N.Y. So he sued Trump. He settled for a $158,000 donation to the Martin Greenberg Foundation. Again, Trump ran to the Trump Foundation for the money.

By the time of these payments, virtually all of the money in the foundation came from other people, most notably ticket broker Richard Ebers and pro-wrestling magnates Vince and Linda McMahon, who gave millions.

So, essentially, Trump used the foundation as a piggy bank to pay his business obligations and to purchase presents for himself.  And because he didn’t pay into the foundation, he was using other people’s money to cover his bills.

The only thing is, paying business and personal bills with foundation money may well be illegal. It’s not called other people’s money. It’s called self-dealing. That’s when people who operate a tax-exempt foundation use its funds to benefit themselves.

If the IRS determined that Trump Foundation money was spent to benefit Donald Trump, say to pay his personal bills, it could require him to pay penalties and reimburse the foundation.

The IRS already punished the foundation earlier this year for a prohibited $25,000 gift it made in 2013 to a politician, Florida Attorney General Pam Bondi while she was deciding whether to investigate Trump University. (She decided not to.) IRS rules forbid foundations from granting political gifts. On its reporting form to the IRS, the Trump Foundation denied making any political gifts, then provided an incorrect name for the group to which it had donated the $25,000.

This looks an awful lot like Donald Trump has his own personal welfare fund. When he can’t pay his bills, he dips into the foundation cashbox – other people’s money.

He might dispute that, claiming he’s a billionaire, but the American people have no way of knowing whether that’s true. Trump needs to come clean. Release those tax returns.

Recently Donald Trump Jr. said there’d be too many questions if his daddy disclosed his 12,000-page return. The American people have the right to ask those questions about a guy who claims to be a billionaire but can’t seem to find the pocket change to buy his own oversized selfies.