On Sept. 2, a tarp covering part of the Liberty Bridge in Pittsburgh caught fire during repair work. The flames enveloped a steel beam that buckled and nearly caused the entire 88-year-old structure to collapse.

A town already racked by hard-to-navigate streets and limited access into downtown was then thrown into mass chaos for more than three weeks while the bridge was closed and workers frantically fixed the damage.

The reopening was delayed multiple times, and the construction company was fined $8,400 each hour the span remained closed. By the time the bridge finally opened, the penalty had reached over $5 million, not to mention the unknown cost of Yinzer (A.K.A. Pittsburgher) angst and fury.

This whole situation not only epitomizes the disaster that is America’s aging and disintegrating infrastructure, but it also symbolizes the horror of a possible Donald Trump presidency.

Trump says he’s going to make America a country that makes things again and those things will be used to rebuild what he calls the nation’s “horrible, horrible third-world” infrastructure. The problem is that his infrastructure improvement plan, like his economic restoration plan and all of his other so-called plans, is a giant fail.

And his past business practices are proof that it’s a fail. 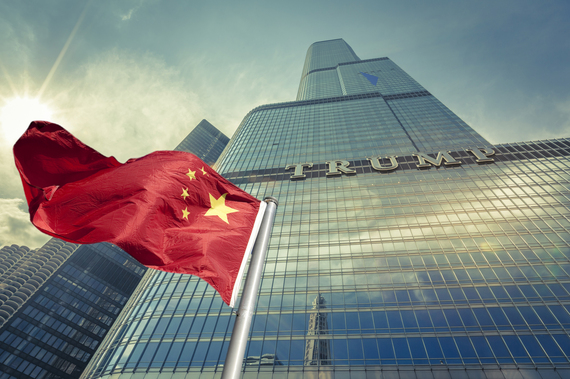 Trump says a lot of things, and he declares them to be the best things, the greatest things, like how he’s going to bring steel back to American cities like Pittsburgh. He’s had countless chances to do this and put his money where his mouth is. Yet he hasn’t.

A Newsweek investigation by reporter Kurt Eichenwald revealed last week that in at least two of Trump’s last three projects, he chose to use Chinese steel and aluminum. Not only did Trump use foreign materials, but he also tried to conceal that fact by making the purchases through a series of shell and holding companies. Trump may have used foreign aluminum and steel in the third building as well. Eichenwald hasn’t finished that investigation yet.

The man who built his entire campaign around a proposal to erect a wall actually built a “big, beautiful wall” in Chicago at the Trump International Hotel and Tower, which opened in 2009. He constructed the Chicago wall with Chinese aluminum. Imagine all of the American workers who could have been employed forging that metal right here in the United States.

To make matters worse, the U.S. Department of Justice and the U.S. Department of Commerce filed documents with the U.S. Court of International Trade accusing the Chinese company that supplied Trump with aluminum of dumping the metal in the American market. Dumping means selling a product at a price below the cost of manufacturing it. That is possible when the Chinese government provides subsidies that are illegal when the product is sold overseas.

Dumping kills U.S. mills and jobs, which is exactly what has happened to the American aluminum and steel industries over the past several years.

Trump’s failure to use American materials to construct his hotels in Chicago and Las Vegas shows not just the fundamental dishonesty that embodies this fraud of a man, but also the insincerity of his claims that he will bring jobs back to America and stand up for workers.

Trump says moves like that make him a genius.

They make him a hypocrite, unfit to be president.

The more American business owners like Trump turn their backs on U.S. producers, the more the industry suffers. Currently, there are 13,500 steelworkers and 6,000 aluminum workers laid off from closed or partially closed mills. And in just the past two years alone, more than half of the country’s aluminum smelters have shuttered due to predatory practices by countries like China, which Trump loves to attack.

Earlier this year at a rally in Fort Wayne, Ind., Trump even said, “We can’t continue to allow China to rape our country, and that’s what they’re doing.”

Yet, clandestinely, he is one of China’s best customers by continuously using their products and materials, to build his hotels, to furnish them, from the dressers to the Bibles, and to supply his signature clothing line, directly fueling the unfair trade he vows to end.

In addition, Trump’s infrastructure plan showcases his lack of knowledge about economics and solidifies his allegiance to rich businesses as opposed to American workers. The plan’s funding relies on getting hold of the $2.5 trillion in U.S. corporate profits currently sitting overseas, which seems like a good idea at first glance. But the way he wants to go about it is just another example of his loyalties lying with Wall Street, and it would also deal a huge blow to the economy here in America.

That’s because his plan would:

So aside from even more manufacturing fleeing the mainland, costing even more U.S. jobs, Trump’s plan would also fail to create the revenue he claims it would to improve America’s infrastructure.

But enough about Trump. Let’s look at Hillary Clinton’s ideas for strengthening the foundation of the U.S. economy.

A key part of Clinton’s plan involves creating a national infrastructure bank, an independent, government-owned bank that would bring in private capital to support public infrastructure, so the bank would guarantee loans, provide below-market-cost credit, and issue subsidized bonds.

Clinton would also create incentives for companies to bring back jobs to the United States. For those that don’t, Clinton has said, “If you desert America, you’ll pay a price.”

Another component of her plan is to establish “Made in America” partnerships that would require “Buy American” standards for manufacturing. This would make betrayals like Trump’s imported wall in Chicago less likely to happen.

Clinton also has a track record of working with the labor union movement. She has testified in multiple trade hearings on the side of workers and was even able to secure Trade Adjustment Assistance for workers affected by the Nestle plant closure in Fulton, N.Y, in 2004.

If he ran this country the way he operates his businesses, America would crumble faster than his Atlantic City casinos went bankrupt.

A nation already suffering from unfair trade and archaic bridges cannot afford the raging fireball that is Donald Trump.