Dodgin’ Donald’s Hiding Something in Those Unreleased Tax Returns

Donald Trump scorns traditional presidential candidate standards. The Donald doesn’t do what’s expected. And he certainly doesn’t do what he tells other candidates they must do.

If Donald doesn’t feel like debating, he stiffs his opponents and grabs attention doing something different. If he finally realizes there’s no way to force Mexico to pay for that “big, beautiful wall” he promised ad nauseam, he converts it to a virtual barrier, a mere video-game blockade.

And when he pledges to release his tax returns, then changes his mind, he simply comes up with an excuse not to do it. That’s Dodgin’ Donald.  Donald Trump is a rich guy, a billionaire 10 times over, or so he claims. And rich guys in America don’t follow the rules that working guys must. In fact, fat cats like Donald celebrate breaking the rules. And that’s why he won’t release his income tax returns. What Dodgin’ Donald doesn’t want workers to find out from those forms is that while they paid the IRS every week, he paid nothing. Or next to nothing. 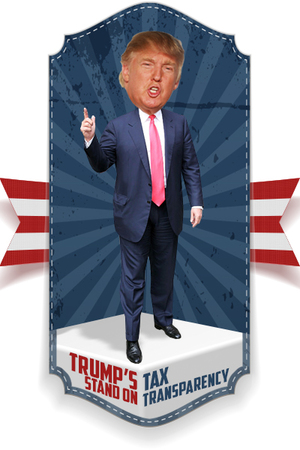 Dodgin’ Donald knows a legitimate presidential candidate must release tax returns. Every major party candidate since 1976 has done it. Richard Nixon even did it while under IRS audit. Hillary Clinton released forms for every year back to 1977 – 39 of them.

When the last Republican presidential nominee, Mitt Romney, dragged his feet, probably because he knew his returns would expose him to be a quarter-billionaire paying an unacceptably paltry 14 percent, Donald Trump went on Fox News to prod him.“Mitt has to get those tax returns out,” Trump said.

But what was good for Mitt apparently is not for Donald.  Maybe that’s because Donald’s more than 10 times richer, so he feels like he can break 10 times the presidential campaign rules.

Releasing returns is not mandatory. But as far as voters are concerned, it is. That’s because the documents reveal more about candidates than easily broken campaign promises. The documents show the level of candidates’ charitable giving, taxes paid, and levies evaded through maddening loopholes exclusive to CEOs, hedge fund managers and billionaires.

In Mitt’s case, the taxes paid level – 14 percent – annoyed many voters who felt a quarter-billionaire who owned five homes should be paying at a higher rate than a bricklayer or nurse’s aide who had a hard time with the monthly mortgage bill for just one home.

On the stump, Trump contends he’s a candidate of the people, cussing out CEOs for exploiting tax loopholes. “They make a fortune. They pay no tax,” he told CBS, “It’s ridiculous, okay?”

But the only Trump federal tax returns that are public show that he made a fortune and paid no tax. For two years, 1978 and 1979.

Submitted to New Jersey gambling regulators as part of an application for a casino license, the returns show Dodgin’ Donald exploited the very loopholes he condemns now – provisions that allow developers to report negative income, in this case $3.8 million.

And it’s not just the federal government Trump stiffs for taxes. He’s in a dispute with the New York town of Ossining over the value of the 18-hole, 140-acre Trump National Golf Course there.

Recently, however, on campaign disclosure forms, Dodgin’ Donald reported the golf course, on which he spent about $45 millionincluding construction of the clubhouse a decade ago, is worth a lot more. On those forms, he said the course is worth $50 million.

And Donald is no chump about taking money directly from taxpayers. When he built the Grand Hyatt Hotel in New York City,the city gave him a $400 million tax subsidy over 40 years. That’s $400 million he didn’t pay and other taxpayers did.

But that’s not all. The Grand Hyatt deal required his partnership team to return a portion of the hotel profits to the city. A 1989 audit found that his team understated the profit and deprived the city of nearly $3 million. The city auditor at the time, Karen Burstein, said Trump approved the accounting decision that shortchanged the city. “This wasn’t just business thinking,” she said, “This was an example of extraordinary flim-flammery.”

Donald has been nothing but dodgy on tax transparency for years now. Way back in 2011, he said he’d hand over his tax returns if President Barack Obama released his long form birth certificate. President Obama came through. America’s still waiting on Trump. But, remember, there are special rules for billionaires like Dodgin’ Donald.

In February, after Trump won the New Hampshire primary, he saidhe planned to release his tax returns “probably over the next few months.”  Like everything else about Trump, he assured the public that his returns were oversized. “They’re very big tax returns,” he said. But, he cautioned, that didn’t mean he paid his fair share as a billionaire, assuring the audience they would be surprised by how low his tax bill was.

When it was clear that Trump would be the Republican nominee, reporters began to press Trump to fulfill his promise to disclose the returns. Then he conjured the excuse that he couldn’t do it because he was being audited – even though Nixon had unveiled returns while audited, and the IRS said it was fine to publicize returns during the accounting process.

Unable to get the documents, “Good Morning America” host George Stephanopoulos asked Trump to divulge the most basic bit of information, his tax rate.

“It’s none of your business,” Trump replied.

It is, in fact, George Stephanopoulos’ business. It is the American people’s business when Donald Trump is the Republican nominee for president of the United States. Voters have the right to know if Donald dodged taxes every year, just like he did in 1978 and 1979, while he routinely used public services like bankruptcy court that other taxpayers faithfully paid for with their IRS payments.