Donald Trump likes to brag on the campaign trail that he’s the best at bribing politicians. He said, for example, “When you give, they do whatever the hell you want them to do.”  But then, when he got caught giving and getting exactly what the hell he wanted, he claimed that’s not what happened.

Not only that, Trump promises as president he would surround himself with the best advisers. The best! Just like he says he did as a businessman. And he claims he’s a great businessman. The greatest! Well, maybe he forgot about his four bankruptcies that left hundreds of small businessmen and craftsmen unpaid. And maybe he forgot about the fiasco surrounding his namesake foundation illegally giving a “donation” to an attorney general who then decided to drop a fraud investigation against him. The advisers in that case? Not exactly the best. 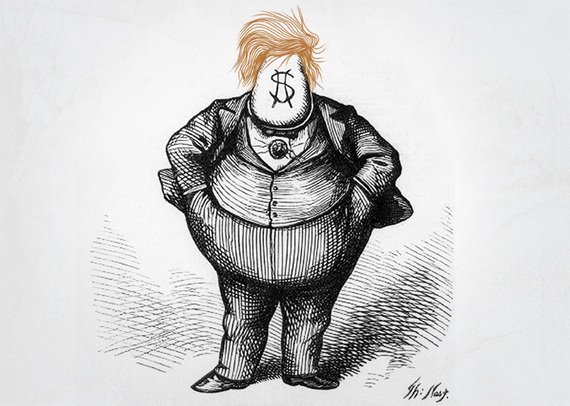 Both foundations get lots of money from wealthy donors; the big difference is in how it’s spent. Among the Clinton Foundation focuses are providing access to HIV/AIDS, malaria and TB drugs in developing nations. Among the Trump Foundation programs are those providing gifts to Florida attorneys general considering whether to investigate allegations of fraud against Trump University.

Though the Trump Foundation gave this illegal “grant” back in 2013, the IRS was alerted to it only recently.

Like attorneys general in many states at that time, Florida’s Pam Bondi, a Republican, received numerous complaints that Trump University was a scam. Angry students who felt they got short shrift for their tens of thousands in “tuition” wanted Bondi to charge Trump and other university officials with fraud or at least help them get their money back.

Bondi’s spokesperson admitted to the Associated Press that Bondi personally asked Trump for a donation at the same time her office was deciding whether to join a lawsuit against Trump University proposed by New York’s Democratic attorney general.

Bondi got a $25,000 check. And isn’t it funny how quickly after that she decided against joining the lawsuit against Trump?

That left the individual Floridians who felt cheated to pursue reimbursement on their own. By contrast, in New York, the attorney general went ahead with the suit, representing students in his state that he believes were fleeced by Trump University in abait-and-switch scheme.

When reporters questioned Trump about the $25,000 gift, he denied Bondi talked to him about a contribution. “I never spoke to her about it at all,” he claimed at first. But later, his spokeswoman admitted Bondi asked Trump for the money.

Trump didn’t take the $25,000 out of his own wallet. He took it from the foundation.

And see, here’s the problem. Non-profit foundations are prohibited by the IRS from making political contributions. And lying to the IRS about it is worse.

Here is how Allen Weisselberg, chief financial officer for the Trump Organization and treasurer for the Trump Foundation explained the bungling that led to the foundation paying a $2,500 fine to the IRS earlier this year.

First, Weisselberg claimed, a Trump clerk was asked to write a check for $25,000 to an organization called And Justice for All, which was Bondi’s political action committee.

And then, he says, the check, somehow, he doesn’t know how, got sent to Bondi.

And that’s not all, folks!

It was just a typo or something, Weisselberg claims.

All this fumbling from what Donnie promises will be the very best advisers in the world. The greatest!

The IRS never would have discovered this on its own. Its staff has been decimated by Republican budget cutting. Republicans don’t want billionaires like Trump to get pinched for tax cheating. So they take care of that problem by eliminating the tax cops.

It took the legwork of Citizens for Responsibility and Ethics in Washington (CREW), several Florida newspapers and theWashington Post to uncover this.

When they did, Donnie denied any of it was done on purpose. Now, don’t forget, Donnie’s the guy who keeps saying things like this on the campaign trail: “I’ve given to everybody because that is my job. I gotta give to them. Because when I want something, I get it. When I call, they kiss my ass.”

In Bondi’s case, though, Donnie denied she kissed his anything. He said they were just friends.

“I’ve just known Pam Bondi for years,” he said. She was a great attorney general, so he sent her $25,000 when she asked for it while she was considering investigating his university and then he concealed the donation through his foundation and she dropped the investigation. Nothing to see here, folks!

Just like his tax returns. He keeps saying there’s nothing there. He claims he’s told Americans everything they need to know about his finances. But after this whole Bondi affair, it’s probably better to go with a new version of the old Reagan admonition when dealing with the Trump tax returns: distrust and verify by seeing the actual forms.