Americans know the ugly truth about money in politics. Though the wealthy conceal payoffs through dark money deposits into political pockets, it’s no secret to the American public that the rich are buying the government.

The extent of Americans’ cynicism about purchased politicians was revealed last week in poll results published in the New York Times. Eighty-four percent said money’s influence in politics is too great. Even more, 85 percent, said the system for funding campaigns must be fundamentally or completely reconstructed.

Americans don’t believe that will happen, though. Fifty-eight percent expressed pessimism. And for good reason. Sure, Americans retain the right to vote politicians into office. But once ensconced, these so-called representatives of the people are far more likely to meet with donors than with voters. And they’re far more likely to pass legislation coveted by the rich than crucial to the rest. The result is the government helping the rich get richer – after which the rich buy even more politicians. And workers lose even more political clout. It’s downright demoralizing. 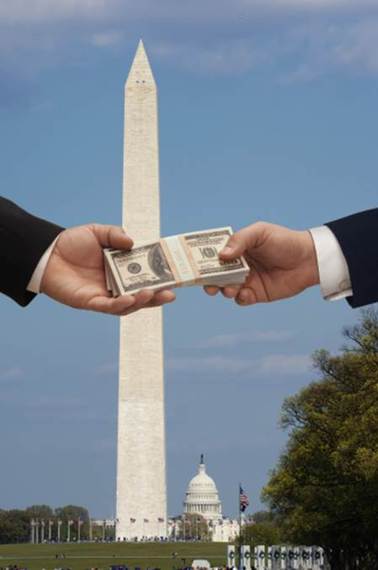 Americans’ visceral understanding of the power of the rich over politicians is supported by two recent studies. One found that ordinary citizens have little or no influence on policy. The other showed politicians far more likely to listen to the wealthy.

Two university professors examined how politicians handled 1,779 policy issues and determined that lawmakers were far more likely to do what the rich wanted.

Martin Gilens, professor of politics at Princeton University, and Benjamin I. Page, professor of decision making at Northwestern University, concluded, “In the United States, our findings indicate, the majority does not rule—at least not in the causal sense of actually determining policy outcomes.”

The rulers, the professors determined, are the rich: “. . . economic elites stand out as quite influential – more so than any other set of actors studied here – in the making of U.S. public policy.”

Just as disheartening is this finding: “When a majority of citizens disagrees with economic elites or with organized interests, they generally lose.”

That makes it very difficult for the majority to change the system controlled by the rich – which explains the high level of cynicism expressed in the New York Times poll.

In the second study, two University of California professors found that the majority has a hard time even getting a foot in the doorway of an elected representative. A constituent can send an email to a U.S. Senator or Representative’s office or call and talk to a clearly bored Congressional intern about an issue. But for a non-donor to get a meeting with the lawmaker or top staffer is pretty unlikely, the two political science professors found.

The professors, Joshua L. Kalla and David E. Broockman, described their results this way: “Our experiment is the first to clearly document that policy makers grant preferential treatment to individuals because they have donated to campaigns.”

In other words, politicians are saying, “Give me money if you want me to give you the time of day.”

The Kalla and Broockman study explains, in part, why the rich get the legislation they want and the majority does not. The political science professors said of the results, “If legislators choose to meet with individuals more often because they have contributed to campaigns, they place unique value on donors’ concerns.”

With the cooperation of a nonprofit organization and its members who were also political donors, the professors sent emails to 191 Congressmen asking for meetings. Randomly, half of the emails specified that political contributors wanted to discuss an issue, while in the others, the donors seeking the meeting were identified only as constituents.

Kalla and Brookman found that members of Congress were more than three times as likely to meet with donors.

Politicians’ snubbing the majority and toadying to the rich means the wealthy control the legislative agenda. Kalla and Broockman put it this way:

“Our results thus suggest that the vast majority of Americans who have not donated to campaigns are at a disadvantage when attempting to express their concerns to policymakers. Few Americans can afford to contribute to campaigns, while those who can afford to do so have markedly different preferences and priorities than the broader public.”

This is cash providing political access, something the right-wingers on the U.S. Supreme Court contended would not occur when they unleashed political spending in the Citizens United and McCutcheon decisions. And, the conservative majority on the court said, even if it did occur, it wouldn’t corrupt politics. Corruption, they contended, occurred only when a politician took money after the donor specified that the gift was to buy a vote.

The rich, however, are purchasing government in ways more subtle than that.

Americans know what all that political money means. It is the end of the American democracy. It is the triumph of governance by powerful business organizations and a small number of rich people.

The New York Times poll found 39 percent of Americans still optimistic that they can overhaul campaign financing. These are the people behind a proposed constitutional amendment to overturn Citizens United. These are the people urging the Internal Revenue Service to forbid political groups from transmogrifying nonprofit social welfare organizations into havens for dark money from rich donors who don’t want their identities disclosed. These are the people urging President Obama to issue an executive order mandating that federal contractors, as well as their directors, officers, affiliates and subsidiaries, disclose political spending.

The 39 percent must win because they’re trying to ensure democracy isn’t defeated by the rich.