Two Republican judges ceded their principles last week to Ohio Republicans intent on suppressing the African-American vote. The Ohio GOP, like their counterparts nationally, have decided that if they can’t win minority voters, they will cheat.

So over the past decade, Republicans across the country have perpetrated fraud in the form of voter ID laws, limits on early voting, restrictions on voter registration and other onerous requirements to make it difficult for minorities, young people and senior citizens to vote ­– requirements described as voter suppression in numerous lawsuits filed to overturn them.

Last week, two George W. Bush-appointed judges said Ohio Republicans could eliminate “Golden Week” when registration and voting may occur on the same day. The third judge on the panel, one appointed by President Barack Obama, dissented, writing that abolishing the week “imposes a disproportionate burden on African-Americans.”

Now along comes Donald Trump claiming he’ll lose the election only if Democrats cheat at the polls. He pointed his finger at Pennsylvania and Philadelphia in particular. The City of Brotherly Love is a filthy den of schemers and scam artists, according to Trump. Pennsylvanians living west of the city line are little better in Trump’s estimation.

Trump besmirched Pennsylvania’s reputation despite the fact that Keystone GOP officials admitted in a lawsuit won by voting rights groups in 2014 that there was absolutely no in-person voter fraud in the state. None. But that doesn’t matter because when Republicans like Trump cheat, they think everyone else cheats too. 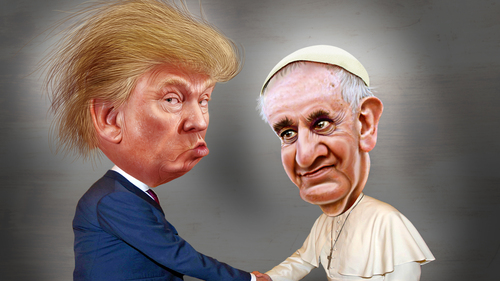 At an Aug. 12 rally in Altoona, Trump called on his supporters to sign up to stand sentry as poll watchers “in certain areas” which other speakers made clear was Philadelphia. So, essentially, Trump was asking white, rural residents to travel to Philly, which is 45 percent black, and try to intimidate voters. Good luck with that.

Here’s what he said: “We’re going to watch Pennsylvania. Go down to certain areas and watch and study and make sure other people don’t come in and vote five times… If you do that, we’re not going to lose. The only way we can lose, in my opinion – I really mean this, Pennsylvania – is if cheating goes on.”

U.S. Rep. Bill Shuster, a Republican from southeast of Pittsburgh, spoke on Trump’s behalf at the event, accusing Philadelphians of nefarious deeds:

The thing is: There is no cheating. The GOP could find absolutely no case of in-person voter fraud – not one – when it desperately needed one, just one, to justify its burdensome voter ID requirements after they were challenged in a lawsuit by the ACLU of Pennsylvania and other voting rights groups.

In the end, the state of Pennsylvania, then completely run by Republicans – governor and both houses of the legislature – stipulated in court that, in fact, there was no in-person voter fraud in Pennsylvania. So, of course, there was no way the GOP could justify its excessive voter ID requirements that would havedisenfranchised as many as three quarters of a million Pennsylvanians.

This had followed a swirl of publicity around a videotaped statement by GOP leader of the Pennsylvania House, Mike Turzai, in which he announced that the then-new voter ID law was “gonna allow Governor Romney to win the state of Pennsylvania.”

That would occur, of course, by disenfranchising people who intended to vote for President Obama’s reelection, including many Philadelphia residents. It would occur by GOP cheating.

In 2014, Pennsylvania courts overturned the voter ID law. This year, the Ohio decision aside, that has been the trend of most court rulings. Many judges have cited the disproportionate effect these voter suppression laws have on minorities. And just like in Pennsylvania, the laws’ defenders have failed to provide evidence of the in-person voter fraud that the legislation is supposedly intended to prevent.

The ACLU and voting rights groups have secured victories in Wisconsin, North Carolina, Texas and North Dakota this year.

In July, a federal appeals court struck down the North Carolina voter ID law, saying it deliberately “target[ed] African-Americans with almost surgical precision” in an effort to depress black voter turnout. As to the lawmakers’ contention that the legislation was needed to prevent in-person voter fraud, the judges said voter ID, “imposes cures for problems that did not exist.”

In the Badger State, the judge wrote, “The Wisconsin experience demonstrates that a preoccupation with mostly phantom election fraud leads to real incidents of disenfranchisement which undermine rather than enhance confidence in elections.”

In North Dakota, a federal judge found the voter ID law placed an undue burden on Native Americans and wrote, “No eligible voter, regardless of their station in life, should be denied the opportunity to vote.” He found that voter fraud in the state has been “virtually non-existent.”

On July 20, a federal appeals court ruled that the Texas voter ID law violated the U.S. Voting Rights Act. This was the fourth time in nearly four years that a federal court decided that the law discriminated against black and Hispanic voters. But, still, the Texas GOP wants to implement it.

Trump is a cheater as well. He cheated small businessmen and craftsmen repeatedly during his multiple bankruptcies, denying them payment for work they performed for him in good faith. Likewise, Trump reported on his sworn financial disclosure forms to election regulators that the Trump National Golf Club in Jupiter, Fla., was worth $50 million, but when it came to paying taxes on the property, he told Palm Beach County it was worth a measly $5 million. Similarly, Trump bought $65,000 in jewelry from a New York store, then had an empty box shipped out of state to evade sales tax – in a scam he got caught at.

That’s how he can accuse Philadelphia and Pennsylvania – without any evidence at all – of trying to steal the election from him. He’d do it.